With only 4 months left until General Convention, a host of staff, consultants, officers, and volunteers are preparing for our witness in Anaheim.

Jan Adams, Katie Sherrod, Cynthia Black, and Louise Brooks are producing a video intended to persuade bishops and deputies to move the Episcopal Church beyond B033 and forward on marriage equality.

Louise Brooks and Susan Russell are shooting another video regarding the Anaheim Appeal. We will soon be encouraging all chapters, networks, circles, and partners to use this video as the basis for small, local fundraising events.

Jan Adams is developing Episcopal Life ads. The March ad--focusing on marriage equality--will soon land in mailboxes. The April ad is being developed in partnership with TransEpiscopal and will focus on transgender issues.

Jan is also organizing a series of presentations for bishop and deputies regarding LGBT concerns that will be held as part of, or alongside, provincial synods this spring.

John Clinton Bradley is working with Douglas Gould and Company and Gus D'Angelo on a short graphic novel regarding LGBT issues in the Episcopal Church.

Michael Bell is managing a plethora of logistical issues. He convened a kick-off conference call yesterday for team leaders. During the next 2 weeks team leaders will select team members from a large pool of highly qualified volunteers. 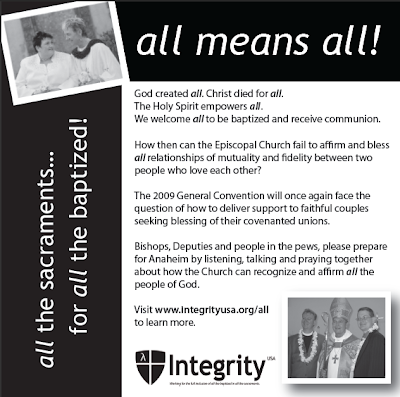 Posted by Integrity USA at 4:03 PM