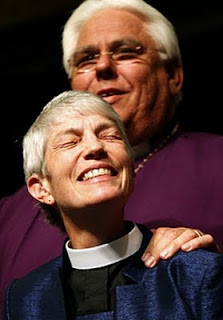 Glasspool is in the eye of an Anglican storm

The newly elected assistant bishop in Los Angeles has become a symbol of hope for gays in the national church but a portent of doom for traditionalists worried about their denomination unraveling.


In the space of a week, Mary Glasspool has gone from being an obscure priest in Baltimore to the emblem of a growing international tempest over gay bishops in the Episcopal Church.


The lesbian priest with salt-and-pepper hair -- one of two newly elected suffragan, or assistant, bishops in Los Angeles -- has become a potent symbol of hope for gays in the national church but a portent of doom for traditionalists worried about their denomination unraveling.

Ask Glasspool, 55, about her central role in the turbulence that has drawn the disapproving eye of the archbishop of Canterbury, the spiritual leader of the global Anglican Communion, and she offers a lament: The struggle for gay rights in the church has never been her primary mission, she says, even as she speaks proudly of her 22-year relationship with her partner, social worker Becki Sander.

Why, she wonders, should a single attribute come to define her after nearly three decades in ministry, years she has spent building congregations, tackling poverty and racism, and making official parish visits in her current role as canon, or senior assistant, to the Diocese of Maryland's bishops.

"You don't get a headline that says, 'Well-qualified priest elected bishop suffragan of the Diocese of Los Angeles,' " she said. "You don't get, 'Fabulous preacher or great joyful person elected.'

"What you get is, 'Lesbian priest.' It segregates out one of the many, many aspects of my personality."

Those who have worshiped and worked with Glasspool say she is, above all, a forthright and deeply religious woman who exudes a contagious energy and has an uncanny knack for connecting with parishioners. She is, they say, someone who long ago seemed destined for bigger things -- and who has kept her personal life largely private.

"It would be a shame if history only mentioned Mary Glasspool in terms of her sexuality," said the Rt. Rev. Eugene Taylor Sutton, primary bishop of the Diocese of Maryland. "She is about a lot more than that. That's why when she walks into a room, people don't see a lesbian. They see a woman of God."

But her commitment has not come without cost, with Sander for a time remaining all but invisible to her parishioners, Glasspool said.

The priest, who must be confirmed by a majority of Episcopal Church leaders, is the second gay bishop elected in the church, the U.S. branch of Anglicanism.

She follows the Rev. V. Gene Robinson, a partnered gay priest who was chosen as bishop of New Hampshire in 2003, an action that sent shock waves through the church of 2.1 million members and prompted an exodus of dozens of theologically conservative parishes and four dioceses.

After Robinson's consecration, the Episcopal Church agreed to refrain from electing additional gay bishops but reversed course at its national convention in Anaheim last summer, lifting its own de facto ban. The Diocese of Los Angeles is the first to test the new policy.

Robinson spoke with Glasspool before and after her election last weekend, telling the priest that her elevation reflected something larger than herself. And he offered her advice. "Staying close to God is the best rule to follow," Robinson said. "I told her that would stand her in good stead and keep everything else in perspective."

Glasspool grew up in New York and followed her father into the Episcopal priesthood, despite his objections to the ordination of women, an idea then gaining traction in the church. She recalls sitting down with him in his church office as a 19-year-old college student and delivering two pieces of news: one about her priestly ambition, the other about her sexual orientation.

"I came out to him," she recalled. "I said, 'I want you to know who I am. If you feel uncomfortable talking to me about the priesthood, I will go to another parish to do my discernment.' "

Glasspool said her father, who died in 1989, told her that he had suspected she was gay and that he wanted her to be happy.

As for the priesthood, Glasspool said her father asked her to meet with their church's vestry, saying he would abide by the decision. The vestry signed off on her candidacy and her father wrote a letter to the diocese on her behalf.

"I think he was secretly supportive but wanted to remain true to his colors," she said. "He allowed me to be an exception to the rule."

Glasspool was ordained in 1982 and, after a stint assisting the priest of a Philadelphia church, took her first position as rector of St. Luke's and St. Margaret's Church, a small congregation in Boston that was on the brink of closing.

Two parishioners said that she delivered heartfelt, scholarly sermons and personalized services in a way that drew new members. She addressed congregants by their first names while administering Communion, they recalled.

During her eight-year tenure, the congregation more than doubled in size, from its original 50 members, according to two of her parishioners.

Glasspool met her partner during this time when Sander, then studying theology and social work, came to interview her for an assignment on female pastors.

Sander became a regular member of the church, but not all in the congregation knew they were a couple.

"To tell the truth, I didn't even know she was gay," Henry Kettell, a longtime church member, said of Glasspool. "It never came up."

And the priest spoke about gay issues only as they related to civil rights for minorities, women and other groups, focusing instead on causes such as homelessness in the surrounding community, church members said.

Glasspool's sexual orientation also remained largely under the radar at her next assignment, as rector of St. Margaret's Episcopal Church in suburban Annapolis, Md. She was the first woman to lead the parish in its 317-year history.

Some in the congregation were not aware that their priest was gay. Others had misgivings but remained in the parish, two leaders recalled. A couple of families left, saying they did not approve of her personal life.

But the subject of Glasspool's sexual orientation was rarely discussed. Instead, parishioners largely embraced the priest, won over by her warmth, intelligence and openness to their involvement, said Jim Hall, the top lay leader at St. Margaret's when she was hired in 1992.

He said that Glasspool helped straighten out the parish's troubled finances and doubled its membership by the time she left in 2001 for her job with the diocese.

"Mary was like a breath of fresh air," Hall said. "She has the ability to talk to you in a crowd and make you feel like you're the only one in the room."

But Glasspool's new job had a downside. Because St. Margaret's was relatively conservative, her partner, Sander, was not active in the parish; Sander ultimately decided to attend another church that welcomed gays and lesbians.

Sander could not be reached for comment, but Glasspool said her partner chose the other church in order to find a more comfortable spiritual home and to avoid friction.

"Becki was very protective of me and did not want to jeopardize my effectiveness and capacity to be a priest for the people of St. Margaret's," Glasspool said.

Glasspool will find a different environment in Los Angeles, where the bishop, the Rt. Rev. J. Jon Bruno, supports greater rights for gays and lesbians. Still, she does not see herself becoming a crusader.

"I want to stay focused, stay centered spiritually," she said. "My top priority is serving God's people in God's church."