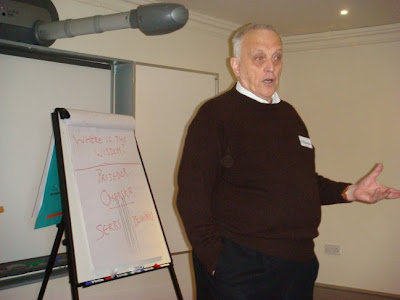 The Rev. Donald Reeves presented the 8th paper, "From Fear To Handshake." He made the following key points...

Posted by John Clinton Bradley at 6:24 AM

Is it astonishing that Donald goes round indulging in such self-glorification over his role in this debacle.

His (paid) mediation contract was cancelled by Mittal when it emerged he was being less than honest with participants.

He uses phrases like "Repeating back to participants the propaganda they spout" which is deeply insulting to victims of ethnic cleansing who are simply seeking acknowledgement for what was done to them. Donald - unqualified in any aspect of conflict resolution or mediation - is totally wrong in judging participants in this way.

He has set back the cause of the Omarska memorial by about two years.

The other project he was involved in - the Ferhadija Mosque - has managed to squeeze him out and carry on without his grand-standing. Again, on this project, whilst he was involved, the outcomes were close to zero.

Don't take my word for it - talk to people in Kozarac who were taken in by his promises and big talk.