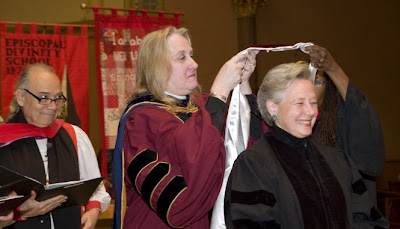 May 25, 2008, CAMBRIDGE, MA – Episcopal Divinity School celebrated its 2008 Commencement Ceremony on May 15, 2008 at the First Church in Cambridge, Congregational, in Cambridge, Massachusetts. Ms. Katie Sherrod, lay woman, and consulting editor for Church Publishing, received an honorary doctorate in recognition of her significant contributions to the struggle for a just Church and a just society. For 30 years Sherrod has worked as a journalist, writer, producer, commentator, advocate, and agitator to promote human rights, particularly combating the interlocking oppressions of racism, sexism, and heterosexism.

Ms. Katie Sherrod, freelance writer and television producer in Fort Worth, Texas, is an outspoken advocate for women’s reproductive rights, and for battered women. "You are a pioneer," said Nancy Davidge, Director of Communications, who presented Sherrod with her degree. "Your seven part series on rape in the 1970s changed the rape laws in Texas and led to the establishment of the first rape crisis center in that state." Davidge continued, "Following your example, women in newsrooms around the country began to report about rape in a transparent and compelling way, and the rape crisis movement was born in no small part due to your efforts." In recent years, Sherrod has been a spokesperson for LGBT inclusion, and for the mainstream voice of the Episcopal Church in the Diocese of Fort Worth. "You don’t give up. Even when faced with verbal abuse, threats, and ridicule, you proclaim the Gospel message is for everyone, and especially for the least, the last, the lost, and the forgotten."

Katie is a long-time member of Integrity. She is a trainer for our Inclusion Activism workshops and will be editing our daily newsletter during the Lambeth Conference. Way to go, Katie!
Posted by Integrity USA at 4:28 PM