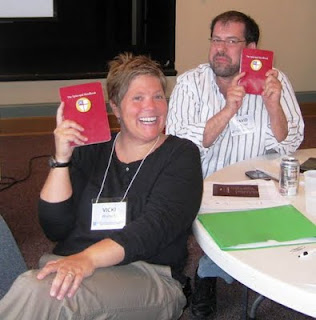 Almost 50 local and national leaders of Integrity gathered last week at Christ Church Cathedral in St. Louis for the After Anaheim conference.The core of the 4-day event was the Faith-Based Community Activism curriculum taught by Vicki Wunsch and David Lohman [shown in the photo] from the Institute for Welcoming Resources. Participants learned several tools for building our movement through graceful engagement…

Participants broke into small groups—national, provincial, and local--to discuss how they could use these tools as Integrity leaders. Participants also shared their hopes for Integrity over the next three years and identified their top three action items for Integrity's leadership to address in the strategic plan.

Sung gave participants a preview of Believe Out Loud—a multi-media campaign to be launched in early 2010. It will encourage clergy and laity in mainline Protestant denominations to publicly share their positions about LGBT equality. 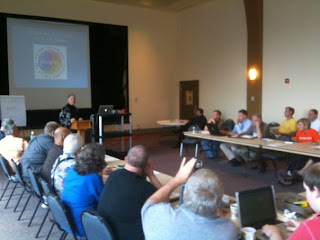 After also included the first annual Stakeholders' Council meeting. Outgoing President Susan Russell [shown in the photo] reviewed the progress Integrity has made over the past nine years she has been on the Board of directors. [A video of Susan's presentation will be available soon.] Incoming President David Norgard discussed recent changes made to the structure of the organization so that it can continue the forward movement of the Episcopal Church. Stakeholders Council Chairperson Joshua Blackwood explained the role of the council and brainstormed ideas for the work of the council. Josh announced that the next Stakeholders' Council meeting and leadership conference is tentatively scheduled for August 26-29, 2010, in .

The outgoing and incoming national Board of Directors had a transitional meeting. They reflected on things done well, goals accomplished, and activities with better-than-expected results. They also reflected on things left undone, goals unmet, and activities with worse-than-expected results. They gave thanks for the ministry of the retiring members of the board and shared their hopes for the organization going forward.

The incoming board had a separate meeting to plan its work. This included discussions about the strategic plan, 2010 budget, communication protocols, ground rules for collaboration, position descriptions, and meeting schedules.

Race, Faith, and Family
By John Clinton Bradley, Acting Executive Director
In late August I attended a 3-day meeting in Minneapolis with CEO's of Integrity's sibling organizations witnessing in the other major Protestant denominations. This gathering is held twice a year and is hosted by the Institute for Welcoming Resources [IWR].

The focus of this meeting was on the intersection of race, faith, and family and was led by consultant Beth Zemsky [shown in photo]. Based on the Intercultural Development Inventory that the CEO's took beforehand, all of our organizations are significantly less sensitive to intercultural differences than we perceive ourselves to be. We have few members and leaders of color because we minimize cultural differences rather than accept and adapt to them. IWR Program Director Rebecca Voelkel encouraged all of us to increase cultural sensitivity amongst our leadership and membership over the next 18-months. Integrity's incoming Board of Directors is discussing how to meet this challenge in its strategic plan.
Meanwhile, here are some actions YOU can take...
Intercontinental Homophobia

Earlier this month I attended a small conference in Boston hosted by Political Research Associates to explore the links between anti-LGBT campaigns in mainline U.S. denominations and increasing homophobia on the African continent. Principal Investigator Kapya John Kaoma [an Anglican priest originally from Zambia but now active in the Diocese of Massachusetts shown in photo] presented a draft paper on this issue and sought our feedback. His research will be made public in the near future.
We also discussed what mainline denominations in the United States can do reduce homophobia in Africa. One concrete idea that emerged was to encourage welcoming and inclusive congregations in this country to form companion relationships with congregations in Africa. I am currently exploring how to design and implement such a program with my colleagues through the Institute for Welcoming Resources. Meanwhile, if your parish is LGBT-inclusive, consider initiating a companion relationship with a congregation in Africa. Chances are your bishop formed friendships with bishops in Africa during the Lambeth Conference and can help make connections.
Out in Scripture
HRC's Religion & Faith Program has released the completed "Out In Scripture" collection, which includes 175 conversations that span Bible readings organized according to the Revised Common Lectionary. For the past three years, week-by-week, the program provided conversations on Bible passages from more than 100 scholars and pastors representing 11 denominations. These conversations are now available in a complete collection online at www.hrc.org/Scripture.

In Jupiter's ShadowBy Gregory GerardSearching for self-truth, a religious, teenage detective confronts Heaven and Hell as he struggles to solve the mysteries of sexuality and faith within a family full of secrets.
Plato or Paul?: The Origins of Western HomophobiaBy Theodore W., Jennings Jr.Explores the notion that the origin of modern Western homophobia lies in Plato's philosophy rather the Bible.
Click here to purchase them through Integrity's Amazon portal!
Unblogged News