Stories from the Pews: Welcoming Immigrants 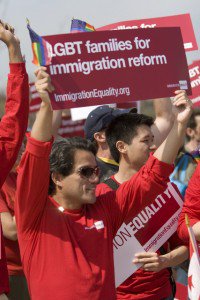 Why People of Faith Should Welcome Immigrants
By Erwin de Leon

At the March for America rally in DC, earlier this year, members of the LGBT and religious communities joined immigrant and minority groups calling for immigration reform. I stood alongside other LGBT activists who support an overhaul of the immigration system and demand that LGBT families be included in any reform effort.

It was a defiant, electric and hopeful moment but I was dismayed to hear a gay man emphasize – without being prompted – “I’m not here to support these illegals, I’m here for my husband.” His husband is a foreign national whom he cannot sponsor for legal permanent residency because the federal government does not recognize lesbian and gay unions.

Aside from the fact that most immigrants are NOT undocumented, the man does not realize that he should protest not only for his husband and for the inclusion of binational couples in immigration reform legislation but for all immigrants.

I would argue that one does not even have to have a foreign-born spouse or partner to support an inclusive and truly comprehensive immigration legislation.

Strategically, it is makes sense for minority groups such as LGBTs and immigrants to support each other - strength in numbers. By showing up for other minorities, they will also show up for us. And it is an effective way to gain visibility and challenge prejudice within ethnic communities.

But I believe that there are more profound reasons to welcome strangers.

As Americans, we need to remember that this nation was founded by immigrants and continues to thrive because of newcomers who only want to better their families’ lives. We should recall our core principles of equality, freedom and justice not for a select few but for all.

As people of faith, we believe that all people are created in the image of God and that we are all called to love one another. Let us not forget our mandate to welcome the stranger – LGBT, of color, immigrant.

I urge my fellow Episcopalians – gay, straight, native-born, foreign-born – to live up to our ideals as citizens and as Christians. Please support comprehensive immigration reform which includes LGBT families.


Erwin de Leon is a parishioner at All Souls Memorial Episcopal Church in Washington, D.C.  His immigrant story was recently told in the Washington Post . You can read his blog  and follow him on Twitter .
Posted by Louise Brooks at 2:07 PM