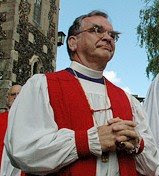 Hat tip to Elizabeth Kaeton's Telling Secrets for telling this secret ... wherein the Bishop of Pittsburgh makes it QUITE clear that his abandonment of the Faith & Order of the Episcopal Church is not an "if'" but a "when."

Suggest that you make sure your bishop sees this before she/he heads for Salt Lake City and the September 17-19 House of Bishops Meeting!

It was very good to be with you at Lambeth. I especially appreciated the time we spent together looking at the relationship between the Common Cause Partners and the Communion Partners, as well as considering issues that are before the WCG. I thought that you might appreciate hearing from me about concerns the approach of the WCG has caused for me and for all the Common Cause Partners.

The WCG proposes "cessation of all cross-border interventions and inter-provincial claims of jurisdiction." There are at least four serious problems with the thinking surrounding the work of the Windsor Continuation Group in this regard.

The first difficulty is the moral equivalence implied between the three moratoria, a notion specifically rejected in the original Windsor Report and at Dromantine. The second is the notion that, even if the moratoria are held to be equally necessary, there would be some way to "freeze" the situation as it now stands for those of us in the process of separating from The Episcopal Church.

The three dioceses of Pittsburgh, Quincy and Fort Worth have taken first constitutional votes on separation with second votes just weeks away. We all anticipate coming under Southern Cone this fall, thus to join San Joaquin. This process cannot be stopped -- constitutions require an automatic second vote, and to recommend against passage without guarantees from the other side would be suicidal.

The third reality is that those already separated parishes and missionary jurisdictions under Rwanda, Nigeria, Kenya, Uganda and Southern Cone (including Recife) will never consent to the "holding tank" whose stated purpose is eventual "reconciliation" with TEC or thevAnglican Church of Canada. (It was obvious to all at Lambeth that the majorities in the US and Canada have no intention of reversing direction.)

The fourth matter is that the legal proceedings brought by TEC and ACC against many of us have been nowhere suspended by these aggressor provinces, with no willingness to mediate or negotiate though we have proposed it repeatedly, not least since Dar es Salaam. For your information, I have written to John Chew and Donald Mtetemela in a similar way. I have also written to the Global South Primates who signed the open letter dated 3 August.

I hope this finds you well. As I pledged when we saw each other, I will do what I can to keep you informed of thinking among the Common Cause Partners, and will do what I can to see that any solutions imagined include both the Communion Partners (on the inside) and the Common Cause Partners (most of whom are on the outside of TEC, or on their way out.)

Blessings to you and yours,
+Bob
Posted by SUSAN RUSSELL at 7:17 PM

Hrm.
Congratulations, ABC and WCG, on the complete failure of achieving any unity via the Windsor process. Apparently moratoria work about as well on churches as they do on teenagers. 'Coulda seen that coming.
As with teens, all this has served is to try to undermine the actual unifying experiences that the bishops managed to accomplish at Lambeth: pissing off all sides equally, and encouraging stronger resolve all around to ignore the other and resist the leaders and authorities.
I wouldn't want the job of ABC, but I have to wonder if I might know a dozen people better for the job than Williams. His heart is in the right place, but he is so very much lost in this crisis.
~Warren