Integrity USA's Board of Directors traditionally meets meets twice each year. The board agreed to hold it's spring 2009 meeting virtually rather than incarnationally to reduce travel costs and carbon emissions. Using a combination of FreeConferenceCall and GoToMeeting, the board convened electronically on Friday, April 17th. Below are the major outcomes....

The Gay Christian Network has just released a new documentary, that tells the story of young Christians impacted by the church's ongoing homosexuality debate. It's 45-minutes long and aimed especially at reaching non-welcoming churches.

Click here to buy a copy thru Integrity's Amazon store!

This new book by Tobias Stanislas Haller addresses the conflict over homosexuality within the Anglican tradition, demonstrating that the church is able to provide for and support faithful and loving relationships between persons of the same sex, not as a departure from that tradition, but as a reasonable extension of it.

It offers a carefully argued, but accessible means of engagement with Scripture, the Jewish and Christian traditions, and the use of reason in dealing with the experience and lives of fellow-Christians. Unlike most reflections on the topic of homosexuality, Reasonable and Holy examines same-sex relationships through the lens of the traditional teaching on the "ends" or "goods" of marriage: procreation, union, the upbuilding of society, the symbolic representation of Christ and the Church, and the now often unmentioned "remedy for fornication." Throughout, it responds to objections based on reason, tradition and Scripture.

Click here to buy a copy thru Integrity's Amazon store! 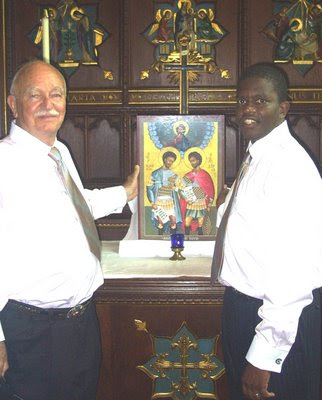 Former Integrity treasurer George Casper (left) and his husband Fred Mazyck (right) on their wedding day in Massachusetts. In accordance with the diocesan guidelines of their bishop, Tom Shaw, they had a civil ceremony followed by an ecclesiastical one.

Posted by Integrity USA at 3:39 PM