We're very pleased to announce that Integrity USA will be hosting the "After Anaheim" conference in St. Louis during September 9-11, 2009.

The core of the conference will be the "Building An Inclusive Church" curriculum produced by the Institute For Welcoming Resources. This workshop is designed to give inclusion activists a "toolbox" for changing hearts and minds through grace-filled, relationship-building at the parish, diocesan, provincial, and national levels of the church.

The conference will also give local and national leaders of Integrity the opportunity to debrief General Convention and together create a strategic plan for the new triennium.

Watch for details in the near future!

The Nominating Committee as been hard at work to fill the ballot for the upcoming election. To date they have received...

Two spots are still wide open. Please prayerfully consider whether you or someone you know might be called to lead our ministry during the next 3 years.

Click here for more information and to submit a nomination! The deadline for nominations has been extended until Sunday, April 5th, in order to fill the ballot. Voting will occur during May. Elected candidates will take office October 1st.

Feel free to contact Joshua Blackwood, Chairperson of the Nominating Committee, at leftpaw76@gmail.com if you have any questions about the nomination or election process. 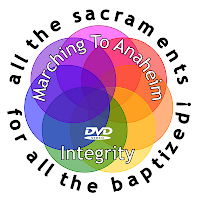 Every local chapter, diocesan network, congregational circle, and proud parish partner should have received a copy of the "Marching To Anaheim" DVD this week along with a supply of Anaheim Appeal contribution envelopes. We are asking them to hold small "screening parties" to raise funds for the Integrity's presence at General Convention. As of today we have received $40,000. We need the help of local folks to reach our goal of $80,000. Please contract our Development Coordinator, Bruce Colburn, at bruce@integrityusa.org to let him know when you will be holding your screening party.

Bruce has 20 copies left of the DVD. He will ship a DVD, along with a supply of contribution envelopes, to the first 20 people who email Bruce their name and address and promise to hold a screening party!
Posted by Integrity USA at 2:16 PM