I got to meet a hero today

At a press conference today at Dignity House in Highland Park I got to meet Fr. Geoff Farrow ... the Roman Catholic priest who has risked so much to speak truth to power on behalf of the LGBT faithful. 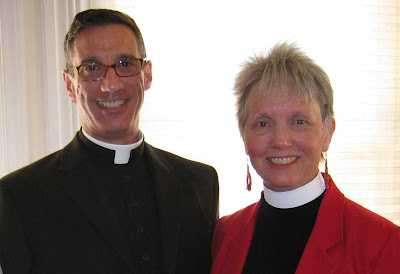 Here's Fr. Geoff with Our Lady of Guadalupe over one shoulder and the Call to Action spokesperson over the other. 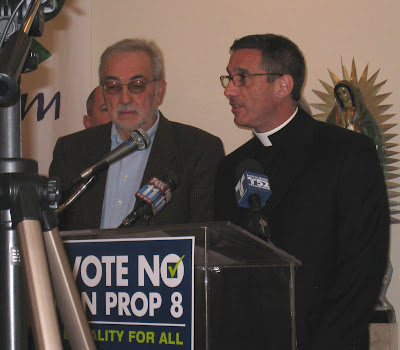 I was particularly moved by how profoundly he understands the stand he is taking to be a PASTORAL position (with political implications.)
.
Here's the statement Fr. Geoff offered today (as posted on his blog:)
.
============
.
You can be a good and faithful Catholic and vote NO on Proposition 8.
Many priests, nuns and ordinary Catholics will vote NO on Proposition 8 because they believe that taking away civil rights from same sex couples is wrong and strips them not only of civil rights but, also of basic human dignity. I know this because they have expressed this to me directly.
.
Many pastors simply refuse to say anything at all on the subject publicly. Most of my brother priests try to help Catholic same sex couples in the same fashion that they help Catholic heterosexual couples who use contraception or, who have divorced and remarried. We try to assist these souls in the confessional and in counseling sessions. We attempt to humanize what can otherwise be impossibly rigid doctrines that crush people or drive them away from the community of faith.
.
As an elderly Pastor once told me: “We are not technicians, we work with human lives”. People are not statistics, they are not a political issue, they are human beings. Initially, I too simply decided to remain silent. But then, more and more people came to me and asked for guidance on this issue. At the same time, the Diocese became more and more vocal in its support for Proposition 8 and began to organize lay people to vote yes on 8.
.
When I was asked to promote my congregation to vote yes on Proposition 8 I was placed in a position of having to choose between my position and the spiritual and emotional well being of those who I was called to serve. Theologians such as, St. Thomas Aquinas have taught of the primacy of one’s personal conscience because on the day that you die it will be your conscience that either acquits or condemns you before God.
.
In good conscience, I cannot place an impossibly heavy load on the backs of those entrusted to my pastoral care and leave them to fend for themselves as best they can. The cost of this would be abandonment of faith, possibly of God. It would probably contribute to isolation, depression and possible despair or, worse (especially for young people). I gave them the advice that most of them would receive privately from most priests, I simply did it openly at the end of Sunday Mass from the pulpit.
.
===============
I was deeply grateful to be there to witness HIS witness ... along with other courageous Roman Catholic leaders ... modeling that faithful Catholics CAN vote No on 8. And ...
.
For all that I was so very grateful to be amongst so great a cloud of witnesses, how it must grieve the heart of God that we ... all of us ... are spending our time, energy and resources responding to this $24-million-plus campaign to mobilize bigotry and to write discrimination into the California Constitution in the name of "Family Values."
.
TWENTY FOUR MILLION DOLLARS ... while there are children who go to bed hungry and we have families without healthcare while others are facing foreclosure, eviction and homelessness.
.
No wonder Jesus wept.
.
Fr. Geoff asked in his interview earlier this week in the Los Angeles Times: "How is marriage protected by intimidating gay and lesbian people into loveless and lonely lives?"
.
He answered his own question in today's press conference. In English and in Spanish. And let's pray that there were those with ears to hear and hearts to listen and minds to change -- that the sacrifices this brave priest is making on behalf of the Gospel will bear the fruit of the defeat of Proposition 8 on the November 4th ballot.
.
Posted by SUSAN RUSSELL at 8:14 PM