This announcement was posted on the Archbishop of Canterbury's website today 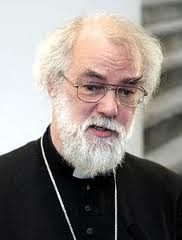 The Archbishop of Canterbury is very concerned at the news that the proposed ‘Anti-Homosexuality Bill’ is once again under consideration by the Ugandan Parliament. Dr Williams wishes to reiterate his views, first expressed in December 2009:
"Overall, the proposed legislation is of shocking severity and I can't see how it could be supported by any Anglican who is committed to what the Communion has said in recent decades. Apart from invoking the death penalty, it makes pastoral care impossible - it seeks to turn pastors into informers."
Posted by Louise Brooks at 3:37 PM