AUTHORIZATION FOR THE BLESSING OF SACRED UNIONS FROM SAN JOQUIN 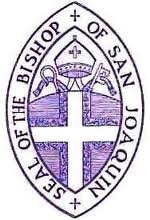 News from the Diocese of San Joaquin

AUTHORIZATION FOR THE BLESSING OF SACRED UNIONS

Since its reorganization in March 2008, the Diocese of San Joaquin has made incredible progress in recognizing a basic truth expressed in 1976 in Resolution A069 of the 65th General Convention, which stated in part, “That it is the sense of this General Convention that homosexual persons are children of God who have a full and equal claim with all other persons upon the love, acceptance, and pastoral concern and care of the Church.”

Since that time the Church has continued to examine what that full and equal claim means. In 2009, the 76th General Convention passed Resolution C056, which directed the Standing Commission on Liturgy and Music to “collect and develop theological and liturgical resources” as they relate to the blessing of same gender relationships. That task is in progress and the results are to be reported to the 77th General Convention in 2012.

In the interim, Resolution C056 stated that, “bishops, particularly those in dioceses within civil jurisdictions where same-gender marriage, civil unions, or domestic partnerships are legal, may provide generous pastoral response to meet the needs of members of this Church.” With respect to the nature of the relationships being considered, they are described in Resolution D025, a related resolution as, “lifelong committed relationships ‘characterized by fidelity, monogamy, mutual affection and respect, careful, honest communication, and the holy love which enables those in such relationships to see in each other the image of God’ (2000-D039).”

In 2009, at its Annual Convention, the Diocese of San Joaquin adopted a resolution supporting C056. Further, following the Annual Convention in 2010, the Commission on Equality, along with Bishop Lamb, hosted a forum on the issue of blessing same gender unions. The forum was well attended and the sense of the forum was that the Diocese is ready to take the next step in full inclusion and support the blessing of these unions.

California currently finds itself in an odd position regarding same gender marriage and unions in that for a short time in 2008, same gender marriages were lawful. The passage of Proposition 8 in November 2008 added a provision to the California Constitution which limited marriages to the union of a man and a woman. This was swiftly challenged. The California Supreme Court, in the case Strauss v. Horton, ruled that Proposition 8 was valid, but would not apply to those same gender couples who were lawfully married prior to the November 2008 general election. This constitutes approximately 18,000 couples whose marriages are legally recognized despite Proposition 8.

California also permits the formation of Domestic Partnerships under state law for same gender couples as well as opposite sex couples if one or both of the persons is 62 years of age or older. These Domestic Partnerships confer upon the couple all of the rights and responsibilities which pertain to marriage under California law.

We must also recognize that there are same gender couples in relationships which reflect the characteristics set forth above who have not entered in Domestic Partnerships, perceiving them to be inferior to marriage, and who, for various reasons, did not or could not marry during the brief time when same gender marriages were legal.

Couples in such relationships are part of the Diocese of San Joaquin. They are in our congregations and in positions of leadership. They are our friends, neighbors, and brothers and sisters in Christ. It is now time, to the extent permitted by California law and the Canons of The Episcopal Church, to extend to these couples the “generous pastoral response” necessary to meet their needs as members of this Church.

Effective on Pentecost, June 12, 2011, clergy in the Diocese of San Joaquin may perform blessings of same gender civil marriages, domestic partnerships, and relationships which are lifelong committed relationships characterized by “fidelity, monogamy, mutual affection and respect, careful, honest communication, and the holy love which enables those in such relationships to see in each other the image of God.” Said relationships shall be called “Sacred Unions” for purposes of the blessing and recognition of these relationships. A liturgy authorized for use within the Diocese will be published separately.

It must also be recognized that the Canons of the Church currently limit marriages to opposite sex couples , as does California law. Accordingly, until such time as both the Canons and state law permit the solemnization of the marriage of a same gender couple, and specific authorization of the bishop is given, no priest of this Diocese shall attempt to solemnize a marriage between two persons of the same gender.

It is to be understood that no clergy will be required to perform these blessings in contravention of his or her beliefs and conscience. However, prior to June 12, 2011, all clergy are encouraged to engage in open discussion of this matter with members of their congregations, particularly those who are members of Vestries or Bishop’s Committees.
Posted by Louise Brooks at 3:06 PM