Every Christian must figure out his or her own way to follow Jesus’ commandment to “Love your enemies, do good to those who hate you, bless those who curse you, pray for those who abuse you.” (Luke 6:27-28). Following this commandment is one the great challenges of life.

It is easy to understand how some LGBT persons or a friends of our community might find it especially difficult to love, bless, or pray for someone like Osama bin Laden.

Homophobia is especially vicious among followers of bin Laden and some other fundamentalists. Being LGBT carried the death penalty in Afghanistan under the Taliban. According to the International Lesbian, Gay, Bisexual, Trans and Intersex Association (ILGA), it still carries the death penalty in several countries, all of which are heavily influenced by Islamic fundamentalism: Iran, Mauritania, Saudi Arabia, Sudan, Yemen, and parts of Nigeria and Somalia. Osama bin Laden and his ilk are filled with hatred, especially against LGBT folk.


I am not saying here that Islam is essentially homophobic, any more than Christianity or any other religion is essentially homophobic. We all know that there are plenty of homophobes who call themselves “Christians.” For an extreme example we can look to Uganda, where the “kill the gays bill” was hatched under influence from U.S.-based Christian fundamentalists, and is supported by many Anglican and Roman Catholic bishops. (Thank God for Bishop Christopher Senyonjo!) Closer to home, Fred Phelps and his Westboro Baptist Church love to proclaim that U.S. servicemen get killed because the American government doesn’t act like “God Hates Fags.” Jerry Falwell famously claimed that gays, lesbians, and other people he didn’t like were responsible for the September 11th attacks.
The upshot here is that LGBT folks are likely to be the victims of fundamentalist hatred, which in its extreme form we often call “terrorism.” Ironically, too often we also get blamed for the violence that comes from fundamentalist hatred.
My personal story.

I was in Washington, DC during the attacks, saw the smoldering Pentagon up-close, and visited the World Trade Center site soon after the tragedy. I still keep dusty scraps of paper from the Twin Towers in a cabinet with my religious images, as a reminder of the prayer I began to pray on September 11th and kept on repeating: “God, use me to heal this sick world, even though I don’t understand what the hell is going on here.” 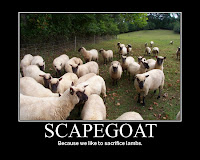 At the time, my job included advocacy on behalf of refugees with the Congress and Bush Administration. Like LGBT folks, refugees became scapegoats for terrorists, and for the people who were supposedly fighting terrorism. Many of them had been tortured and had seen their loved ones killed by terrorists. At the same time, people who “looked like” they might be Muslim faced intense prejudice on the streets. And the U.S. Government enacted laws that blamed many refugees for terrorism, by basically saying that if they had provided any assistance to a rebel group (even under threat of violence against themselves or family members) they themselves were “terrorists.” For the next several years, I worked to change laws that our government put in place supposedly in order to fight terrorism, which actually just hurt innocent people and fostered more animosity around the world.

I still pray that God will use me to heal this sick world, even though it’s beyond my ability to fully understand it. That’s my way of trying to love my enemies, and that’s why I’m working at Integrity.


Personally, I have been disappointed, but not surprised, to see people gloating over bin Laden’s death. I have also been annoyed, but not surprised, by a few glib statements about forgiveness from people who seem to want to ignore the monstrosity of bin Laden’s crimes, and the continuing threat to humanity (especially to the global LGBT community) posed by terrorism. I was relieved to hear that bin Laden will no longer to be able to spread his message of hate, although I know many others continue along that path. To borrow a comment recently posted on Integrity’s Facebook page, “I’m not celebrating … and not crying either” because of this week’s news.

What’s your story?
Posted by Louise Brooks at 8:31 PM

Whew. Sharing my story? Sharing decades of fear, of resentments, sometimes hate, deep grief and much personal loss...decades, a lifetime, of knowing ¨right from wrong¨ on different levels of observing ¨right from wrong¨-- previously knowing the unthinkable, injustice, bloody abuse and still trudging onward with a fair degree of love in my heart and hope on the morning of Septemeber 11, 2001.

I was working at the InterContinental Hotel, Isla Verde, San Juan, Puerto Rico the morning of September 11th--suddenly the Food and Beverage Director rushed passed me in the lobby and into the Plaza Club to watch a giant screen T.V.-- he didn´t tell me why he ran but he had a desperate/panic look on his face. I followed him in...in just in time to see the second airplane hit the twin towers-- everyone was in shock-- like when JFK was assasinated, the World shut down around me and I went blank but vaguely aware--it was still dead quiet hours later as the Hotel Security set up barricades/check-points at all the entrances--people milled around murmuring, speculating, struck dumb and staring...nobody could leave, the airports were closed we were all on automatic pilot circling the confusion of everyday life and pending in grief for all those known and unknown.

Already I had survived devestated emotions and myself when JFK and Martin Luther King had been murdered. Already I had survived my sensibilities with smashed real life dreams as so many I had loved had died over the years and my beloved had been murdered a few years back--already I knew how to ¨just be¨ in a life that sometimes takes all human feelings to a cliffs edge and then pushed me and them into the vast unknown free fall of acceptance. The beyond my greatest fears.

So, there I was again knowing there was nothing I could do (or should do). I was once again at the place where ¨letting go and letting God¨ was the only way to go forward in my life...it´s the trusting in God which has saved me during the most overwhelming times of my life. As if there was anything I could do except ¨accept the things I can not change¨ and ¨change the things I can¨-- as if I had a real understanding of the grand scheme of things or the insanity that sometimes floods into all of our lives.

Once again life was/is operating way beyond me but I now have trust enough to know that I´m not being irresponsible to ¨let go and let God¨ handle the mess, the unthinkable the unreasonable and insane-- I trust God (and now I trust Barack Obama too) and believe that my personal integrity depends of me facing reality...no hiding or pretending *things* are different than they really are, no cowering or running from the child of God in me...no matter what facing the reality in me (and you too).

Thanks for this, Max. For the challenge and for the reminder that the work we do for LGBT Equality is but part of our call to be followers of the Lord of Love, Justice and Compassion.

On Sunday at All Saints in Pasadena, our Prayers of the People will read:

We pray for those who have died and for the families and friends who grieve, remembering especially:

Robert “Bob” Anderson
Marshall Beavird
Lois Bergstrom
Leslie Bradford
George Unger
Michael Valladares
all victims of terrorist attacks
--and, in the spirit of Jesus who called us to pray for our enemies as well as our friends, for Osama bin Laden