As some people in the United States and elsewhere in the world took to the streets to celebrate the killing of Osama bin Laden May 1, Episcopalians began offering notes of caution and reflection to those reactions.


"I am not sorry that Osama bin Laden is dead … But I don't celebrate his death, either," the Rev. Jay Emerson Johnson wrote on his blog.

"That distinction, though subtle, is an important one for Christians who claim to be an 'Easter people,'" Johnson wrote, noting that the al-Qaeda founder's death came one week after Christians marked Easter. "Easter celebrates God's decisive victory over death. We taint that celebration if we find anyone's death a cause for celebration and jubilation, and perhaps especially when that death is violent."

Johnson, who teaches at the Pacific School of Religion in Berkeley, California, co-chairs the theological resources subcommittee of the Episcopal Church's Standing Committee on Liturgy and Music.
Bin Laden was found and killed during an operation by U.S. military and intelligence members in a large compound in the city of Abbottabad, about an hour's drive north from the Pakistani capital, Islamabad. Just after 11:30 p.m. May 1, President Barack Obama went on national television to confirm reports that began circulating about an hour earlier about the military action and bin Laden's death.
"Justice has been done," Obama said.
The president, noting that he was echoing the words of his predecessor President George W. Bush, said that "our war is not against Islam" and he said bin Laden "was not a Muslim leader; he was a mass murderer of Muslims."
Diocese of Southern Virginia Bishop Herman "Holley" Hollerith told the Virginian-Pilot newspaper that "my initial reaction was relief."
"Then I found myself feeling very solemn about the whole thing," Hollerith said. "I think the death of any human being is not to be joyfully celebrated. At the same time, I do believe that justice was done in this regard."
Diocese of Newark Bishop Mark Beckwith wrote on his blog that "justice may sometimes involve violence; vengeance is always directed by violence -- of one sort or another. And the desire for vengeance lies close to the surface in everyone."

Crowds began to gather in front of the White House, at the site of the World Trade Center towers in lower Manhattan and in Times Square, among other places, before Obama spoke, and they later grew in size. People in celebratory moods chanted "U.S.A., U.S.A," in tones that some reporters described as more common after an Olympic victory.

"I am deeply uneasy with the gloating and the cheering outside the White House, and elsewhere, as if this was a Super Bowl victory," the Rev. Jim Richardson, rector of St. Paul's Memorial Church, wrote on his blog May 3.

About 15 minutes after Obama concluded his announcement, Diana Butler Bass, a writer and educator, asked on her Facebook wall, "What if we responded in reverent prayer and quiet introspection instead of patriotic frenzy? That would be truly American exceptionalism."

Fifteen minutes later she wrote: "Sometimes I realize that I'm really a biblical literalist at heart: 'Do not rejoice when your enemy falls, and do not let your heart be glad when he stumbles.' (Proverbs 24:17)"
The Very Rev. Samuel T. Lloyd III, dean of Washington National Cathedral, said in a May 3 statement that those at the cathedral "share with our fellow Americans a sense of relief that Osama bin Laden's life of hatred and violence is over."
"As followers of the Prince of Peace, however, we Christians regret profoundly the necessity of this killing," Lloyd added.

Diocese of Central Pennsylvania Bishop Nathan Baxter said that while he understands the desire to celebrate bin Laden's death, he urged caution "lest we lose [sight] of the most important work of peace and understanding in the politically named 'War on Terrorism.'"

"The work of everyday Americans, especially Christians, is to live into the best of our faith teachings, resist extremists' abuse in any religion, and guard the dignity of our neighbor, especially Muslims," he wrote.

In Maine, Bishop Steve Lane wrote on his blog that he was having trouble sorting out his emotions about bin Laden's death until he woke up May 2 to read that a mosque in Portland had been vandalized with graffiti equating the al-Qaeda leader with Islam. That act, he wrote, put his feelings in sharp focus.

Saying he is a pacifist as well as a Christian, Lane wrote that "every person, however sinful, is a child of God for whom Christ died."

"I trust that God is attending to bin Laden in a manner that surpasses my understanding," Lane wrote.

The bishop called for "prayerful reflection on Jesus' call to love our enemies" and "prayers for peace and for all the victims of the spiraling violence in Iraq, Afghanistan, and all across our globe." 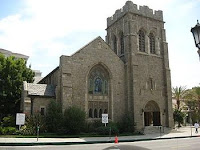 Some Episcopal Church parishes reflected on bin Laden's death during regularly scheduled worship services or special gatherings. During the daily noon Eucharist May 2 at All Saints Episcopal Church in Pasadena, in the Diocese of Los Angeles, the Rev. Susan Russell changed the readings from the propers for the upcoming Sunday, as is All Saints' custom, to ones centered on peace and reconciliation. They included Micah's prophecy of a time when all people would gather in peace on the mountain of the Lord, Psalm 85's prediction that righteousness and peace would one day kiss each other and Jesus' call in the gospel of Matthew to love one's enemies and pray for one's persecutors.
The Rev. Ed Bacon, who is on sabbatical, sent a statement on behalf of himself, the wardens and the vestry to the parish which Russell read during her homily. The statement said that bin Laden's death "presented an important moment of reflection, prayer and action for peace-loving people around the globe."

"We understand and share a sense of relief and visceral satisfaction that bin Laden's physical voice is silent," it said. "A mass murderer is dead."

The statement noted that "Jesus calls us to a new way of being" that involves praying for enemies.

"The nature of the global network of care demands that perpetrators be captured and brought to trial under the rule of law," it said. "The rule of law must prevail over the rule of war… We must see today the dangers and distractions of triumphalism and celebrations of another's death."

Bacon and the lay leaders called for a united global effort to "replace policies of retaliation and humiliation against enemies with passionate, imaginative diplomacy."

Russell, whose son serves in the U.S. Army, said earlier in her homily that she had wrestled with complex emotions after hearing about bin Laden's death. "I am more grateful at this moment than I have words to express that I have a liturgical container for all of the complicated thoughts and feelings, anxieties and fears, reliefs and all the rest of it," she told the congregation.

At the Parish of St. Clement in Honolulu, Hawaii, the Rev. Liz Zivanov invited members to a gathering on the evening of May 3 to discuss a Christian response to the death of Osama bin Laden."

-- The Rev. Mary Frances Schjonberg is national correspondent for the Episcopal News Service.
Posted by Louise Brooks at 9:41 PM