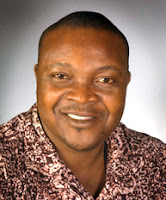 Among his stops will be the Episcopal Church's Executive Council June 11-14 meeting in Parsippany, New Jersey. He will be an invited guest of the Council's National Concerns Committee.

Mac-Iyalla will visit about 20 cities and participate in 52 events before departing July 5 to attend the General Synod of the Church of England. His tour is being sponsored by dailyoffice.org which was founded by Josh Thomas primarily as a means of supplying the Daily Office of prayer to internet users.

Click here to read the rest.
Posted by John Clinton Bradley at 7:51 PM