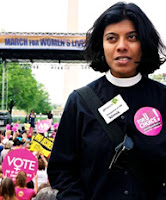 Martin Luther King Jr. wrote the Letter from Birmingham Jail (published in The Christian Century in 1963) as a response to a letter from Alabama clergymen, Christian and Jewish, titled A Call for Unity.

A Call for Unity decried the intrusion of so many black activists into their peaceful city to stir up trouble. These activists were marching for the rights of black people to equal access to public facilities and full protection under the law. The response was that the law blasted them with fire hoses, beat them and jailed them. It was a different time and place, and a movement most of us have come to agree was of God and significant in expanding the definitions of a person guaranteed rights by the founding documents of this country and advancing the experience of God's justice and peace in this nation.

Our House of Bishops was clear in its response to the primates' communiqué that an alternative primate is not allowable under our polity. We, as a church, now have a summer season in which to consider, again, moratoria on same-sex blessings and openly gay bishops. We've already imposed moratoria through General Convention 2009 on the consent to openly gay bishops, but we have declined to act on same-sex blessings, leaving such blessings unsanctioned but not illegal.

Can we further disallow something not allowed?

Click here to read the rest.
The Rev. Winnie Varghese, a member of Executive Council, is Episcopal chaplain at Columbia University in New York. She also serves on the executive council of the Episcopal Peace Fellowship.

Photo by Episcopal Life Online and used with permission.

Posted by John Clinton Bradley at 8:37 AM