A Note from Kampala

“Alleluia …Not as Orphans” 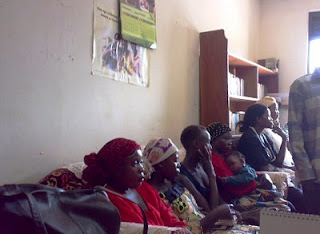 About twenty Ugandan women filled the tiny office that Integrity members in the USA have been renting for Bishop Christopher over the last decade. We listened to each tear-wrenching story of domestic violence, AIDS orphans, the need to earn a living to feed their children and send them to school. Esther Mbaziira graduated with a degree in Information Technology and is one of 5,000 local graduates who are struggling to find work. Only 800 of these graduate students will find work in Uganda this year, where a third of the country still lives on less than a dollar a day. Esther leads the women’s group and divides them into two groups, one to develop a budget and business plan for a potential catering business and the other a rural group to make bricks and raise poultry. The energy in the room was palpable. It moved from a cloud of despair and hopelessness to flooding with ideas and collaboration.
Poverty-the great equalizer 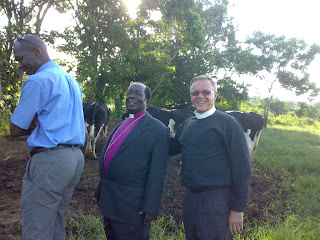 I visited many rural communities this week who want to help themselves enough so that AIDS orphans can attend school and eat while their teachers and parents might manage to make a living.


As we cris-crossed the country, Gay and straight, Muslims and Christians all worked and planned together under the auspices of Bishop Christopher’s “St. Paul’s Center for Reconciliation and Equality”. 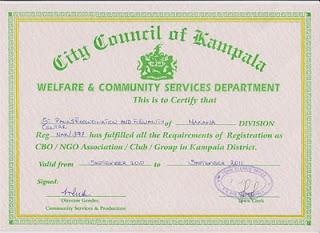 Although the LGBT community has been particularly traumatized this past year with the proposed Bahati Bill, Uganda has an emerging progressive and inclusive community where straight allies are employing their LGBT friends and families and a powerful emerging network. In Kampala itself, we met some leaders of a local Coalition of about 30 human rights and religious organizations (including Integrity Uganda) and their work, against all odds, has been very successful. This is a remarkable “David and Goliath” story and the work of this Coalition got international attention and support right up to President Obama and most European governments. However, these courageous straight and gay allies are expecting another round of fighting when the government elections are over in early 2011 and another form of the Bill will be introduced, perhaps, as the Anglican church there recommends “ to make the promotion of homosexuality illegal”.


A new “Gay Straight Alliance”
It is an inspiration to hear Professor Sylvia Tamale, a distinguished Law Professor at Makerere University described the Bahati Bill as “A blessing in disguise”. She said “This dark cloud over us had a silver lining in that it had created a strong local movement that lobbied members of parliament, the local and international business community and policy makers to defeat this proposed legislation”. Dr. Tamale had just edited a book on “African Sexuality” that will be available in March that refutes many myths about sexuality in Africa, particularly the claim that homosexuality is a “Western import”. It has been an inspiration to see how this straight and LGBT Ugandan alliance has made progress against all odds.
“Where is the Church?”
Bishop Christopher’s office is in an economically deprived part of Kampala and his reach is deep into poor rural communities where family values and inclusion remain strong. We visited many rural communities this past week and it is a national tragedy that these communities have been largely ignored by the government and mainstream churches. These voiceless and under-represented populations are willing to work together to improve the economic and civil rights of all Ugandans. Pastor Joseph Tolton from Rehoboth Temple in Harlem, (an inclusive Pentecostal Church who recently hosted a program for Bishop Christopher) remarked how connected the issues of poverty, oppression and neo-colonialism from the western fundamentalists have deepened the divide between the “haves” and the “have nots”. The Church has been more vocal against homosexuality than about these neglected communities. 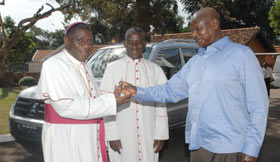 Yesterday’s paper had a photo of President Musevene giving a $40,000 Pajero vehicle to a newly-consecrated Church of Ugandan bishop (the equivalent of receiving four times ones annual salary – a public bribe that would be inconceivable in any other democracy except here. The President, who is seeking reelection for his forth term in early 2011 gives a new vehicle to every newly consecrated bishop in the Anglican and Roman Catholic Churches (estimated to be over $2m worth of gifts to the church leadership in recent years).
The LGBT Community is the “canary in the coalmine?” First the gays then everyone’s civil rights are under threat.
In the two weeks we have been in Uganda, we have seen several major infringements of human rights for all Ugandans from alleged rigging of local primary elections for the government party (600 complaints have been filed in 1 week), to government clampdown on all public demonstrations in Kampala under the guise of national security. The churches are all silent about these obvious unconstitutional practices while continuing their chorus of anti-gay rhetoric. I wonder what our women’s group and many of the rural groups would do could do with a Presidential $2 million dollar windfall?
There is equality in poverty in that we have seen some of the most marginalized gay and straight Ugandans working together. One of the most successful anti-poverty programs that appears to be working most successfully in Uganda is to be elected a bishop! Following your enthronement, you are guaranteed a four-year salary bonus from the government! Meanwhile Esther and her twenty local women, squeeze into a 200 square foot office space, dream of a day when they can feed and clothe their children and work together with gay and straight neighbors. 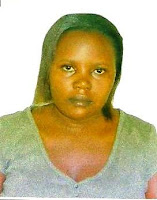 Integrity USA is continuing to support Bishop Christopher and a new full time Program Manager and part time bookkeeper (we raised $32,000 on his recent tour for his work) but he now needs Esther to work full time full time if these programs are going to have a chance to grow and become a support system to full time work for these women. I hope you will respond to our appeal to raise the $3,000 he needs so the work prophetic Integrity began a decade ago by former President Michael Hopkins, can continue to courageously flourish. Click here to donate. Check the box for "Integrity Uganda" under "Purpose of Gift."

From The Reverend Canon Albert J. Ogle
Vice President for National and International Affairs
Posted by Integrity USA at 6:49 PM