Forty years ago today the foundations of The Episcopal Church (and the Anglican Communion for that matter) shook a bit as two things took place: Another woman was ordained. She was ordained by the Rt. Rev. Paul Moore, Jr., Bishop of New York. That woman was openly lesbian. She was among the first 50 women ordained in The Episcopal Church, but she was the FIRST lesbian to be ordained priest in the Anglican Communion.

Some reading this will have no clue about whom I write. Others will know and remember very well who that woman is. Her name is Ellen Barrett. Today is the 40th anniversary of her ordination. Congratulations first to Ellen and then to The Episcopal Church on such a milestone. Ellen now lives in England and continues her ministry as Sister Helena.

This posting was intended to be a surprise for Ellen and I hope everyone who had a clue also kept their mouths shut! So: Surprise Ellen! Congratulations on the 40th anniversary of your ordination. You have achieved a milestone many never reach.

I invite those reading (who are old enough!) to look back 40 years. Ordained women were a novelty in The Episcopal Church. (Some groups had other descriptive terms that will not be repeated here. Suffice to say they came from groups and organizations that could not fathom women in any leadership positions, much less as clergy.) Lesbian and gay priests (LGBTQ wasn’t on anyone’s radar back then) were a novelty as well and anathema to some. The discussions about the place of lesbians and gays in The Episcopal Church in both lay and ordained leadership were pretty much still in the embryonic stage. So yes, foundations shook a bit 40 years ago.

The Reverend Doctor Ellen Barrett is one of the pioneers of our faith. She is one of our icons in the struggle for equality. She is one of our elder statespersons who led the way so that those who followed would have an easier path to take. Sadly, many today really do not know who broke down barriers to LGBTQ people’s inclusion in the church and society. Many simply take for granted the things they enjoy as openly LGBTQ. History apparently is not a popular subject, especially church history. 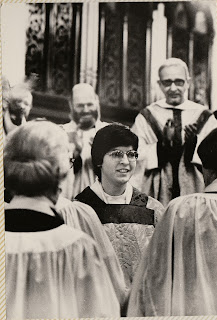 In one of the epistles attributed to St. Paul is the declaration that a price was paid for us, meaning of course, the redeeming actions of Jesus Christ on our behalf. Well my kindred in Christ, I think we forget that a price was paid for us to be openly LGBTQ followers of Jesus Christ. The price was ostracism, exclusion, loss of jobs, being the object of meanness and nastiness rarely known among church folk and often the demonization of us just because of who we are. Ellen Barrett paid such a price. She paid it so she could be ordained and she paid it so that those of us today who wish to be open about our authentic selves AND serve the church might be able to do so.

Our beloved founder, Dr. Louie Crew Clay included one of my favorite collects from the prayer book in his correspondence with me:

"O God of unchangeable power and eternal light: Look favorably on your whole Church, that wonderful and sacred mystery; by the effectual working of your providence, carry out in tranquility the plan of salvation; let the whole world see and know that things which were cast down are being raised up, and things which had grown old are being made new, and that all things are being brought to their perfection by him through whom all things were made, your Son Jesus Christ our Lord; who lives and reigns with you, in the unity of the Holy Spirit, one God, for ever and ever. Amen."


What wonderful words to mark an event four decades ago as things were indeed being made new, being raised up, as the world watched.

The black and white pictures were very secretly borrowed from Ellen’s personal materials and are from the ordination service.

If anyone wishes to send a congratulatory note to Ellen, please send messages to alisonjoyosb@gmail.com

Blessings on Ellen from Integrity USA.


Posted by Integrity USA at 2:02 PM No comments: