A message shared by the Right Rev. Chet Talton, Bishop of San Joaquin.

Carolyn Woodall, who was recently ordained to the diaconate and is assigned to St. Mary in the Mountain Church in Jamestown, sent me an email last week which I would like to share with you.

October 19th is Spirit Day. If you're not familiar with it, here is part of the Wikipedia entry about it:

In early October 2010, Canadian teenager Brittany McMillan promulgated the observance of a new commemoration called Spirit Day, the first observance of which took place on October 20, 2010, in which people wear the color purple to show support for LGBT young people who are victims of bullying. Promoted by GLAAD, many Hollywood celebrities wore purple on this day to show their support of this cause, and many websites added a prominent purple shade to their design.

The name, Spirit Day comes from the purple stripe of the Rainbow Flag, defined by Gilbert Baker, creator of that flag, as 'representing "spirit"'. The observance was inaugurated in response to a rash of
widely-publicized bullying-related suicides of gay school students in 2010, including that of Tyler Clementi.

At our convention in 2010 we started our forum on blessing of same sex relationships with a memorial to Tyler and the others we know of who had taken their lives because of bullying.

I personally observe this day by wearing purple and not being shy about why. I believe that we, the Church, should also observe it. It is not on Sunday, but on a Friday. That keeps it on a school day. However, for those congregations who wish to commemorate those youth and to express an anti bullying message (which would be all of them, I would hope), I would ask leave to wear purple stoles and use purple paraments on October 21st. I would also ask it be put in the Friday Reflection for a few weeks beforehand - maybe starting this Friday.

Given our commitment to inclusion, especially considering GC2012's resolutions against bullying, for transinclusion and the blessing of same sex relationships I believe this is a perfectly appropriate message which should be observed by all, and which should be voiced far and wide. It is, simply put, that our prayers are with those who have been, and currently are, victims of bullying and we condemn it as being a violent act not in keeping with Christianity.

I think that Carolyn is performing diaconal ministry by bringing Spirit Day to our attention. I do believe in the proposal that we as a Church observe this day. I do commend it to you and ask Sunday October 21 be designated as Spirit Day Sunday and that the color purple be used, and that there be some comment as to the meaning of Spirit Day in your bulletin and or announcements. This is not a Direction, but a request entirely in keeping with our baptismal vows "to recognize the dignity of every human being". SUNDAY OCTOBER 21, SPIRIT DAY SUNDAY.

Posted by Lis Jacobs at 6:09 PM No comments:

Acknowledging the VOID by Christine Mackey-Mason

Walking With Integrity will be featuring guest Bloggers for several weeks, special thanks to today’s blogger, Christine Mackey-Mason. Would you like to be a guest also? Just check out the Blog Faerie Commandments On the right hand side of this page.

We had our first Integrity Board call a few nights ago and Louise Brooks was not a part of that call. I felt a huge hole during the entire call. Louise was not afraid to speak her mind on those board calls. I think that many of us hold back our thoughts and opinions because we are afraid that we might offend someone or we’ll alienate a boss or co-worker. Louise had the rare courage and chutzpa to say her truth as she felt and knew it. If it was something that she felt strongly about, she let you know. Louise was Director of Communications on the board of Integrity. Being on the board of Integrity is a volunteer position. Integrity would never have been able to afford the caliber of work that Louise produced for Integrity. Her knowledge of the spoken and written word was a major contribution to Integrity’s work over the last 8 years. The Voices of Witness films are a credit to her ability to put a vision on film.

The last vision Louise brought to fruition was a film about Transgendered people called Out of the Box. The video was released on June 1, 2012 and screened at the Episcopal General Convention in Indianapolis July 2012. It was a tremendous success. It was my personal favorite. When I finished watching the film for the first time, I didn’t want it to end. I had become so vested in these people’s lives, I wanted to know more. The film changed people’s hearts and minds. All of our legislation for Transgendered people was passed through both the House of Deputies and the House of Bishops. So different from just 3 years ago. 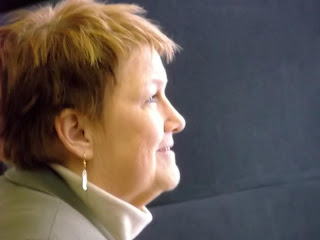 I think that it’s ironic that while the Transgendered people in OOTB talked about being “re-born” into the authentic persons they are today, Louise felt her sickest. The publicity picture taken of Louise during the last days of filming was the best picture I had ever seen of her. I commented on it when she sent it to me. She said “I felt so lousy and nauseous on that day”. You would have never known it. Her face was soft, calm and with a beautiful smile.

Unfortunately, due to the ravages of chemo therapy, she was not able to see the film screened in Indianapolis. Louise put her heart and soul into this film. Perhaps she felt that it would be her last. She was passionate about people understanding who Transgendered people are. Her passion showed in every frame of the film from the opening of baby photos to the very last piece of music during the film credits.

Louise was a courageous woman. She fought her cancer with everything she had in her. I believe that her faith, love, courage, sense of purpose in life and her sense of responsibility for her fellow human beings carried her through to seeing the film Out of the Box realized. If you haven’t seen the film you should click on the link below. Thank you Louise for making such a wonderful faith filled humanistic film about a group of people who have been sadly neglected in both the hetero and homosexual worlds. You will be remembered for your courage of person and truth of word and film.

(As Susan Russell stated in an earlier blog, Louise very much wanted to see a Spanish language version of this film made. It would be a tremendous insight for the Spanish language culture to see. If you would like to help make this a reality go to IntegrityUSA and click on donate and make an offering.)
Posted by Lis Jacobs at 4:00 PM No comments: 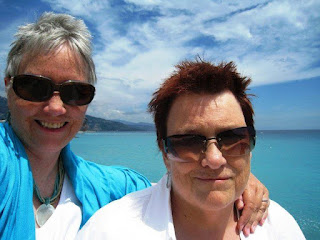 Posted by Integrity USA at 9:50 AM No comments:

It was 2006, the first time I was a volunteer at General Convention, that I met Louise. I was the main writer that year, and she was head of the communications team, as she was in 2009 and 2012. Over the years we became close friends. It was Louise who called me to ask if I would step in when David Norgard had to resign before completing his full term as President; it was Louise who kept me abreast of things I should know about in the national and international church; it was Louise who kept pushing ahead and keeping us on track.

Her passion for LGBT rights and LGBT inclusion in the Church has been an inspiration to me. I can’t imagine that she ever thought about much else – she always had an idea of where Integrity should be going, how we should be presenting our message, how we could do a better job. It will be impossible to fill the huge space she leaves; Integrity will need to find two or three people to pick up the work that she has done so faithfully, even when discouraged and even when extremely ill.

Louise has left us a tangible legacy in the Voices of Witness video series. The first one tells the story of same-gender couples whose relationships are blessed by God and the Church; the second, filmed by Cynthia Black and Katie Sherrod, gave voice to LGBT Christians in Africa; and the third, released just a few months ago, Out of the Box, tells the experience of transgender Episcopalians – in their own voices. We are so grateful that she completed these projects in her competent and painstaking way – producing material which has helped to move the Church towards greater and greater levels of inclusion.

My heart goes out to her spouse Susan Russell, her brother Fred, and the whole family as well as their church family at All Saints Pasadena.

Into your hands, O merciful Savior, we commend your servant Louise. Acknowledge, we humbly beseech you, a sheep of your own fold, a lamb of your own flock, a sinner of your own redeeming. Receive her into the arms of your mercy, into the blessed rest of everlasting peace, and into glorious company of the saints in light. Amen.

Posted by Integrity USA at 11:10 PM No comments:

Rise in glory Louise, valiant warrior for LGBT rights around the world. From her wife: Susan Russell:

"After a valiant fight and surrounded by love and light my Louise left us this afternoon shortly after 3:30. We are devastated and so very grateful for the tremendous care she received, the abundant prayers that surrounded her and for the peaceful and painless end of a long, courageous struggle."

Add you thoughts and remembrances here at the blog in the comments. 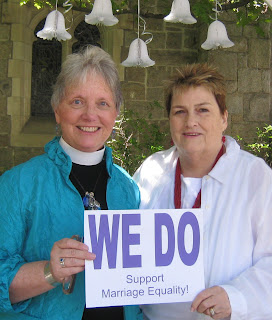