In the past few months I have read several agonized reports on the supposed death throes of the Episcopal Church. I have not studied the statistics or interviewed masses of people. However, I have traveled in the opposite direction from those who have left the Episcopal church, and am glad that I have.

I've been an Episcopalian for a little over a year. I found a church home with strong preaching, a loving community, and attention to scripture, reason and tradition. The liturgy moves me, the clergy challenges me, and I am both inspired and heard. After 10 years as a Baptist, it has been a welcoming new home.

Yes, I do understand that membership numbers are down. Much of that, of course, is because a number of congregations and many individuals left the Episcopal Church when it accepted gay and lesbian clergy several years ago. Being among the first major denominations to resolve this issue, though, is both a blessing and a curse -- yes, some people left in anger, but I also know where the church will stand from this point forward, and I agree with that position. The wrenching dislocation of that question is resolved. There is a blessed settledness to that. 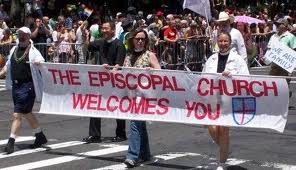 "But," some of the alarmists cry, "isn't accepting gay priests (and gay marriage) an abandonment of the church's biblical understanding of marriage?" If the bare language of the Bible indeed should be a bright line, then we crossed it long ago in accepting previously married and divorced people to be married in Episcopal churches -- because that is something that Jesus directly condemned (unlike gay marriage).
However, if we have erred, we have erred on the side of love -- and did so long ago, at about the same time most denominations stopped worrying about commerce on the Sabbath. This change does not trouble me. The theology of Christ was defined, after all, by who he loved, not by who he condemned. Episcopal congregations have traditionally been named for Christ as gracious savior (i.e. Christ Church), for martyrs (i.e. St. Stephens) and for the Holy Spirit (i.e. Holy Comforter). No one ever named their church Christ the Condemner.

What I found in the Episcopal Church in the post-Gene Robinson age was the spirit of one of my professional heroes: Thurgood Marshall, an Episcopalian who was not afraid to talk in moral and even religious terms, and who was relentlessly optimistic about his fellow man. For example, in voting to strike down the death penalty in the case of Furman v. Georgia in 1972, he wrote this:


As the Chief Justice and Mr. Justice Powell point out ... capital punishment has been with us a long time. What purpose has it served? The evidence is that it has served none. I cannot agree that the American people have been so hardened, so embittered that they want to take the life of one who performs even the basest criminal act knowing that the execution is nothing more than bloodlust. This has not been my experience with my fellow citizens.


Justice Marshall believed not only in God, but the essential goodness, Godliness, of his fellow men. In that same spirit, I am a new Episcopalian who embraces the love of God, the guidance of scripture and the beauty of worship. The Holy Spirit is not a leaden stillness but a wind, and I feel that deep truth when I worship in my new church. Yes, some have left, but I am coming in, unafraid and unashamed.
The Episcopal Church is ready for me, and I am ready for it.

Mark Osler is a Professor of Law at the University of St. Thomas
Posted by Louise Brooks at 2:40 PM No comments:

Call to Action: 2012 Hours Against Hate

Integrity USA supports the 2012 Hours Against Hate campaign and urges it's membership and supporters to take an active part.

2012 Hours Against Hate is a campaign to stop bigotry and promote respect across lines of culture, religion, tradition, class, and gender. Launched by Special Representative to Muslim Communities Farah Pandith, and Special Envoy to Monitor and Combat Anti-Semitism Hannah Rosenthal, the State Department is asking young people around the world to pledge their time to stop hate—to do something for someone who doesn’t look like you, pray like you, or live like you. We are asking the next generation to work together to build a stronger, more tolerant world. No one group can do it alone

Special Representative Pandith and Special Envoy Rosenthal officially launched “2012 Hours Against Hate” at the Organization for Security and Cooperation in Europe (OSCE) in Vienna, Austria on February 17, 2011
.
Stand Up and Speak Out.

Hate is Hate, No Matter Who the Target Is.

Email your stories & photos of volunteer efforts to 2011HoursAgainstHate@state.gov

Presiding Bishop Katharine Jefferts Schori’s is the latest voice to join the 2012 Hours Against Hate campaign. Jefferts Schori’s video message, posted Aug. 2, notes the world’s “incredible diversity,” which she said “as a scientist and a person of faith, I think that’s an enormous blessing” because “each one of us comes with a different gift.”

“At the same time, there is an ancient human tendency to distinguish oneself from people whom one understands as ‘other’,” she said, adding that such distinctions can be either a blessing to the other person, or a way to allow for viewing the other as an enemy.

“People of faith are called routinely to see the other as a person like themselves,” she said. “We are called as Christians to love our enemies, to understand every human person as carrying the image of God.”

Jefferts Schori said that the campaign is an invitation to step across artificial boundaries to discover friends among the other, and to join together to make the world a better place.

Posted by Louise Brooks at 5:23 PM No comments: