Update from Texas and the Transgender "Bathroom Bill" 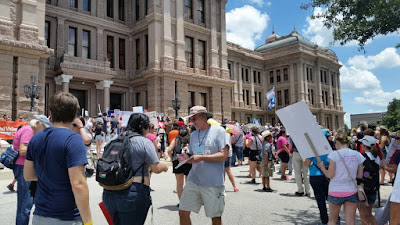 As the special session of the Texas Legislature winds down, I would like to make a few observations on the life lessons I have learned as a Loud Mouthed Transgender Texan of Faith.

With only a week to go (as of this writing) the chance of a “bathroom bill” getting passed by the Texas House of Representatives is getting smaller and smaller. We must stay vigilant during the remaining days of the special session and also be alert to the Governor’s next political move.

First of all, I would like to say thanks to everyone who stood with and by me in so many ways that I can never fully express the love that I felt. Standing with so many other transgender/non-binary folks and our allies gave me a glimpse of what solidarity must look like. Testifying, lobbying, and sometimes even having to justify my right to exist was both daunting and lonely. For those who bought gas, put me up for the night, supplied coffee, shared a smile, sent me an encouraging Facebook post, and most especially those who reached out and gave me a hug when I was ready to give up on the world, I say "Thanks." I may have often gotten lonely but I knew that I was never truly alone. Most of you know that I can be very high strung and emotional but one of the things that always kept me grounded was the fact that on every trip to Austin, I was able to spot out fellow Episcopalians in the crowd.

One of the sadder aspects of this battle has been both the loss of support and the lack of support that
resulted from me making a public stand. Friends and family have either strengthened their connections or have further distanced themselves from me. I mourn for the losses. For me to be a Christ-like role model, I must be honest about myself and be very public about my support for the rights of the transgender community. God in all of Her glory will not let me rest until I have stood up for every young person who has not yet found their own identity and voice. Nor will I be able to rest until I have spoken out for every trans elder in our community who is just beginning to find their voice. I will raise my voice until we can all stand together with one voice.

I have been disappointed in leaders, most especially certain religious leaders, who seem to lack the
courage to publicly stand up for all of God’s children. Showing your support silently or in ways that are so safe that it renders your support to be invisible has been the toughest realization to bear. I and others like me will carry on with or without you. In the end, you are accountable to God for your own lack of courage. I have greater respect for folks who have the courage to voice opinions that are
different than mine than I have in folks who hide in the shade and make no stand at all.

While this battle may be winding down (at least temporarily) in my part of the world, the real battle is
just beginning on two important fronts. First of all, we must reach out to those who have been damaged by the open hostility shown to so many trans folks of all ages. We must show love and real support to those who have lost faith in the decency of humankind. Secondly, we must find a way to educate those who did not stand with us and somehow find a way to work and walk together. After all, there will be further battles to fight. To make an ally out of a foe may be God’s toughest assignment yet, but imagine the things that we could accomplish together.

There are so many folks that are fighting for social justice in our country at this time. I know that you are often weary and tired, but always keep in mind that YOU ARE MAKING A DIFFERENCE.
Lastly, I ask that you pray that my own wounds will heal so that I may better see Christ in others.