The Unfailing Love of Pauli Murray -- a Saint for Us Now 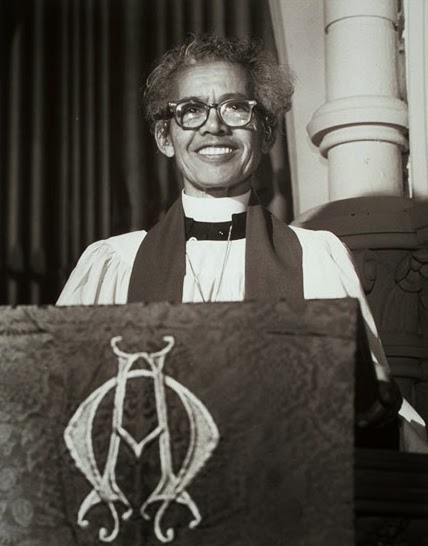 My introduction to Rev. Dr. Pauli Murray was from a search on the internet for material for Integrity’s Friday Flash, our weekly newsletter. My first thought was: why are we not talking about this Episcopal hero all the time!? Here was an exemplary being, a freedom-fighter, a woman of mixed race and elastic gender who, in the most difficult days of the 20th century became a the first African American to receive her J.S.D. from Yale, was a civil rights activist, and at age 66 became the first African-American woman ordained the Episcopal Church. Of course, some of us were talking about Pauli— both the Union of Black Episcopalians and Episcopal Women’s Caucus are champions of her memory. A vote at the 2012 General Convention of the Episcopal Church named her to Holy Women, Holy Men - an Episcopal saint.

Here is an excerpt from a sermon titled "The Dilemma of the Minority Christian" from Anthony B. Pinn’s collection Pauli Murray: Selected Sermons and Writings

Put in its simplest terms, salvation is feeling safe, living without fear, living with the serenity in confidence that we are the objects of God's unfailing love, and that we will always be safe whatever happens, in life or in death, if we have a complete and childlike trust in God's love and tender mercy.

This is a great leap of faith, which does not come easy, which deserts us continually, and which we achieve only by the greatest pain and effort — every day a trial, every breath a prayer. Salvation does not mean that we will avoid suffering, shame, humiliation, or defeat. It does mean that we are not alone — God's love, which was poured out for us in Jesus Christ, is always  with us, to strengthen and save us in every situation, if we have trust in his love.


“Feeling safe, living without fear…in confidence that we are the objects of God’s unfailing love…” What a radical proposition! Particularly from a woman of mixed race, slippery gender, and a sexuality that could not be shared by any person of ambition, much less a woman of color then.

Now here we are, in 2015, working towards a more earthly safety for LGBTQ people, for whom the intersections that Murray embodied still can mean not just discrimination, but violence and even murder. Yet we find strength in this world of suffering, because we know the truth of Murray’s words, that Jesus Christ is always with us and we are indeed the objects of God's unfailing love!

Lau clearly sees her own role as the means by which young leaders can step into their own. When she talks about Pauli Murray, you get a sense that Murray -- or "Pauli" as Lau calls her -- is in the room with you encouraging your relationship and ideas. We all felt Murray’s presence at our meeting, even there in a sandwich shop in downtown Denver. There, we agreed that we would do all we could to share Murray’s grace with our membership and to bring attention to our own multifaceted identities. Pauli Murray can serve as a starting place for community connection.

Over the next months, leading up to General Convention, we’ll talk more about our vision for collaboration with the Pauli Murray Project. We hope you’ll have the same experience of Murray that we have come to have on many occasions. And we pray that our vision encompasses the kind of work Murray herself would have us do, to foster divinity through human connection, by creating enriching society, and by sharing the Holy Spirit through graceful service.

Posted by Integrity USA at 3:42 PM