A year ago today I married my wife Lori at All Saints Church in Pasadena. Surrounded by friends and family and using the iconic liturgical language of our faith tradition we pledged to love, honor and cherish each other until death do we part. Then Ed Bacon pronounced that we were spouses for life. 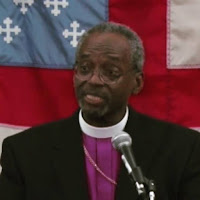 This morning we woke up together in a Salt Lake City hotel room. Our anniversary present came two days early when the Supreme Court ruled that every other American couple was as entitled to the fundamental right of marriage as we were. Our anniversary agenda includes a very early wake up call to participate in a march with the Bishops For the Elimination of Gun Violence, corporate worship with 5000 or so members of our Big Fat Episcopalian Family in the massive convention hall worship space and then an afternoon of legislative process which -- we hope -- will include the House of Bishops debating ... and adopting ... Resolution A036 from Committee #20 -- amending the canons of the Episcopal Church to make the sacrament of marriage equally available to same and opposite couples.

And let me be clear -- this struggle has never been about inclusion for inclusion's sake. It has been about inclusion for the Gospel's sake -- so that we might become more fully the Body of Christ God created and calls us to be. And that means marching to end gun violence, working to challenge marginalization and dismantle oppression in all its forms, recognizing that because all lives matter it matters that we say #blacklivesmatter until we make that resolve a reality.

But hey -- if I can wake up in a Salt Lake City hotel room with my wife on the first anniversary of our marriage in a country with full stop marriage equality, in a church with Michael Curry as the Presiding Bishop-elect then anything is possible.

As Rachel Maddow would say: Watch this space.
Posted by SUSAN RUSSELL at 8:39 AM