Transgender Discrimination at the Highest Levels of Government 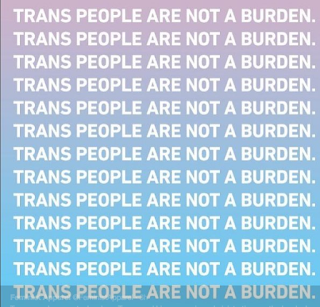 I find myself baffled at the just plain old meanness and nastiness of the Trump Administration. Trump himself seems to delight in being mean to others. He has clearly shown himself to be what he has been all along: a bully, an insecure man who demands loyalty and cannot cope with those who do not hand over their loyalty to him. Perhaps someone should remind him that loyalty per his own oath of office and that of every federal employee is to uphold and defend the Constitution of the United States of America. It is not to pledge loyalty to any single individual or group….just to the Constitution.

His stance against transgender men and women serving in the United States military is not justifiable by any logical measure. But then again, we are not dealing with logic here. Any person who wants to serve or is serving in the military should be judged by only one standard: Does she or he meet the mental and physical requirements to serve. Those are essentially the same for cisgender men and women. Why should there be a different standard for transgender men and women? There should not be. Anything else is purely and blatantly discrimination based on gender expression and gender identity. Such discrimination is wrong and unjustifiable.

Trump’s position, regardless of what his military “experts” tell him is at odds with the policies of our major allies. Canada, Australia and Israel, to name only three, all allow transgender women and men to serve in their military units. Are we really so arrogant that we think they are wrong and we are right here?

Integrity USA stands in support of transgender women and men serving in our military.

We do so with the full backing of The Episcopal Church. Canon law in The Episcopal Church prohibits discrimination against transgender women and men (as well as a host of other variations in the human expression of sexuality, ability, etc.). “The law,” so to speak is on the books and has been for several years now.

I urge everyone who reads this to do exactly what I have been imploring all to do for months now: call, email, write, visit your elected representatives in the House of Representatives and in the Senate. Make your opinions known. Cite the canon law that governs our church. Cite basic human dignity and decency. Cite the decisions rendered by a number of courts that prohibits such discrimination.

It is time to raise some hell, my kindred in Christ. It’s time we flipped the tables of the money changers in the Temple. Our transgender kinfolk need us now more than ever.