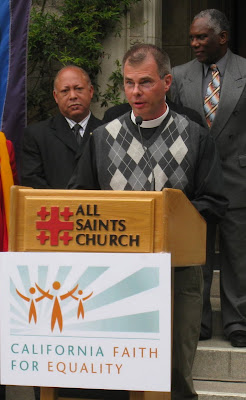 As President of Integrity, I am proud to stand in the company of the Rev. Eric Lee today. In his role as President of both the Los Angeles Chapter of the Southern Christian Leadership Conference and of the California Christian Leadership Conference, he has taken an unequivocal stand for marriage equality within the State of California. Recognizing marriage equality to be the justice issue that it is, Lee stood up immediately in objection to Proposition 8 and has not wavered since then. Indeed, his commitment has been steadfast as evidenced by both his speaking and his writing and I commend and praise him for his unflagging effort.

Dr. Lee works within the context of a noble history of justice-makers. The Southern Christian Leadership Conference has been a resolute champion of civil rights ever since its founding in 1957. Moreover, it has maintained the position that injustice laid upon one community affects all communities. Just recently, for example, the national leadership of the organization renewed its call to Congress for passage of the Matthew Shepard Hate Crimes Act.

Yet Lee’s position on marriage equality has not been universally supported by fellow leaders and other members within the SCLC. On the contrary, it has brought considerable criticism to him personally and stirred controversy within the organization and among its supporters.

For nearly forty years, Integrity has worked to advance the rights of LGBT people within the Episcopal Church as well as across our country. Consequently, it too has weathered controversy and criticism, not only from foes but also from friends. And so we understand and all the more deeply appreciate the special courage Lee has exhibited in both speaking up and standing firm. The people of Integrity are grateful for his ministry and glad to recognize him as an ally and friend in the just cause of marriage equality within California and beyond.
Posted by SUSAN RUSSELL at 11:54 PM