Members of Integrity from several chapters in Province II attended the National Equality March in DC on Sunday 11 Oct. Representatives from Integrity Rochester and Integrity NYC met with delegates from Province III and Integrity DC to march together. There was a notable amount of Episcopalians throughout the crowd, and Integrity Vice-President of Local Affairs Neil Houghton, was one of the religious delegates noted at the Invocation given at the beginning of the program. An audible cheer went up from the Episcopalians when Neil was announced.
Chap Day, Province II Coordinator for Integrity USA attended with a group of activists from Queens NY, including Integrity NYC members from Queens, the Gay Peruvians, Queens Pride Committee, the ISO, and at-risk LGBTQ homeless youth who are in a program called Generation Q, as well as with Daniel Dromm, the openly gay District Leader of 39th Assembly District A, and a Democratic nominee for New York City Council, Distict 25.
"This event was one for local organizers to get motivated and empowered. The youth who attended from Queens NY saw community organizing at its best. They got to interact with positive forces on all levels from IntegriyNYC, to elected officials like Danny Dromm, and to celebrities like Cynthia Nixon and Lady Gaga. The message was one for those who will be taking the baton and need to be told that they can make a difference for the good," commented Micheal Mallon, a member of IntegrityNYC and Queens Pride Committee.
It was disheartening, that the delegation from IntegrityNYC returned home to learn that on Friday night a hate crime had occurred in College Point, Queens. A 49 year old gay man was beaten late Friday night/early Saturday morning, and is now in a medically induced coma. His family did not release the information until Monday. Organizers from Integrity NYC, Daniel Dromm's office, the ISO, Queens Pride, the Gay Peruvians, and Generation Q who met to organize for DC are now working together for a Vigil and local action.
"It is upsetting that this is the type of event we're now having to organize for; the high of empowerment on Sunday, and now the low of demoralizing hate and fear the next, and this is why our mission is so important," remarked Chap Day.
Attached Photo by Jon Nally (iNYC). 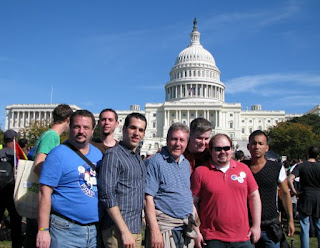