Last Friday we posted an article titled Executive Council May Not Meet In Utah.  This story generated debate in some corners of the online Integrity community.  So, we invited member Winnie Varghese to more fully explain what happened during Executive Council and why she took the position that she did... 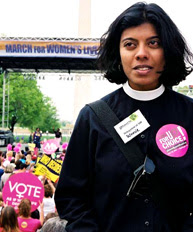 At the 2009 General Convention, we passed a resolution asking that “All Episcopalians” work for the full civil rights of gay and lesbian people.  That was a thrilling moment.  Last week at the Executive Council meeting, I raised the issue of how that resolution intersects with the our decision making regarding meetings arrangements for the Executive Council.  Does our spending reflect our commitment to the civil rights of gay and lesbian people?

On the final day of the Executive Council meeting in Memphis a resolution came to the floor proposing Salt Lake City, Utah as a site for the majority of meetings of the current triennium.  It has been the practice of the Executive Council to hold one meeting in every Province of the Church each triennium.  We have nine provinces and nine meetings, so this works well.  This triennium we are faced with a significant budget cut, and the resolution proposed was an attempt to streamline costs by arranging a long term contract with one hotel or conference center for 7-9 meetings in a city that is also a hub for major airline.

The General Convention Office selected an assortment of cities that are within dioceses that pay their full 21% asking to The Episcopal Church.  It is a resolution of General Convention that The Episcopal Church refrain from holding its meetings in dioceses that do not pay their full asking.  This is also a difficult resolution to abide by, and I believe it is a priority of the group in this triennium, particularly if we are to commit so much of our resources to one city.

It presents an interesting resolution in that we do not generally stay in properties owned by a diocese.   Because of the size of our meetings, we stay in hotels or conference centers.  Therefore, it is of no economic benefit to a diocese for Executive Council to meet in a city within a particular diocese, and because of our work schedule, we have very little interaction with the ministries of the diocese in which our meetings are held.  It is also interesting to consider the fact that it might be encouraging to those Episcopalians who wish to support the work of the larger church but whose diocesan leadership does not pay its full asking for the Council to meet in a city within such a diocese.  However, as Executive Council I believe we are obliged to attempt to follow the word and spirit of a resolution as well as possible.  If we do not follow our own governance structures, it seems a bit empty to ask others to do so.

There are other resolutions of General Convention that govern how and where we meet, among them is a resolution passed at General Convention 2006 that requires all meetings of our church that are in hotels to be contracted with hotels that allow unions for their workers.  It has been reported to us at Executive Council meetings that we are not actually budgeted enough money to fulfill that resolution, so we try to live within the spirit of it as well as we can by attaching riders to our contracts and by avoiding hotels that are in the midst of labor disputes.

I did not oppose the proposal of Utah as the site for the next seven consecutive meetings, however I did raise issues about how that choice intersects with our priorities.  As a practical matter, this location causes difficulty in travel for our members coming from the Carribbean, Central and South America.  It is also not the least expensive option or the most convenient travel for the majority of the council.  But the issue raised that sparked debate was that Utah has one of the most draconian state laws regarding gay and lesbian persons, which could pose serious hardship for any partnered gay or lesbian person who must attend the meeting.  , If we have resolved at General Convention to support the civil rights of gay and lesbian persons, how would we do that in Salt Lake City, Utah?  I raise the other issues, because I think the last issue would be less significant if we were to choose the cheapest place that is also the easiest travel time and cost for the majority of people on the Council.  That might be a grim choice, and probably not one that I would look forward to, but it would be a different thing altogether if it was simply an issue of cost.

I was very clear that I did not expect the committee reporting to change it's work.  I did not ask that we not go to Salt Lake City.  I was also honest about the impact it will have on me. My parents live in Dallas, TX.  I know about cities and institutions that get around oppressive state law, and I also know I essentially undo my family when I go to visit my parents.  That is our legal reality.  That is the fine line many of us walk daily and are accustomed to working around.  It is not legally safe.  It is not just.  I negotiate those spaces by insuring that I have well placed friends that can help me work around the law.  I am a healthy person.  I am lucky and privileged, but I've put on a priest's collar many times to get into a hospital room when a partner is not recognized.  I know how fragile these constructed safety nets are.  I live in a state in which my partner and I can build some protections for our family.  We think very carefully about it when we leave.

In this age of Marriage Amendments, new state laws defining marriage and wonderful new laws opening up the institution to more of us, we are in a new place.  There are many reasons to go to locations like Salt Lake that have energized leadership around changing harmful state laws and provide support to those efforts.  The issue is not whether the Council can or should meet in locations with discriminatory laws aimed at gay and lesbian persons.  The issue is that the council ought to be deliberate about its planning when it chooses a location that is governed by particularly hostile laws.  At the Council meeting, no one in the room was able to generate a resolution to the proposed resolution to meet in Salt Lake City that worked for the group.  It might have just been that we are a new group tired at the end of a four day meeting.  For the sake of time and contract negotiations, we will have to make a decision on this issue before our next meeting.  It is my sense that everyone involved is taking all of the factors in question seriously.

Salt Lake City is a beautiful place and one that would be much more comfortable and interesting for many in the group than meeting in a more spartan setting for a lower price.  I wouldn't be surprised or unhappy if that is the choice of the Council.  Personally, I have heard wonderful things about the social justice witness of the Diocese of Utah, and I have great friends who live in the area.

But let me be very clear, in my opinion this is the mistake made in the 21% resolution, the diocese is a different entity than the state.   We are giving our business to a city, county or state.   We are governed under the laws of the city and state. The good will of a vibrant and important diocese of the church is equivalent to the city, county or statewide laws that govern us while we are there.  The state of Utah has made it very clear that I enter their state at my own risk.  It is not just that I cannot be married there, I hadn't planned to be married at a meeting of Executive Council.  It is that the Marriage Amendment states that "no other type of domestic union or arrangement will be recognized."  Texas, where I grew up and where my family lives passed a similar amendment to its constitution.  I think the Dallas/Fort Worth area would greatly benefit from regular meetings of the Executive Council.  I would love to support those working for full equality in that part of the church.  I know what it feels like to be "the church out there."   Those are all relevant considerations.   AND the Council needs to be aware of what they are asking of some of us.

Finally, the Council is in meetings all day when it meets.  The work is overwhelming and consumes all of our time together.  At the meeting in Memphis it could not be arranged for us to make a collective trip to the Civil Rights Museum.  I wonder if we could have resolved this issue differently if we had, but we could not I assume for issues of time and expense.  At this meeting as in previous meetings someone in our group was hospitalized during the meeting.

There are always compromises when dealing with hotels and meetings arrangements.  I'm happy to bear the weight of some of those compromises as others do, but they need to be stated aloud.  Regardless of the outcome of this particular issue, please know that I have enormous respect for your work and witness in the church and in the world.

Posted by Integrity USA at 4:15 PM

Mahalo nui loa, Winnie, for the excellent response you wrote for IntegrityUSA. Your remarks are accurate, comprehensive and thoughtful reflections of what took place during that meeting arrangements dis...cussion at Executive Council. I concur 100% that we all have to take a sacrifice "hit" from time to time, and that we cannot ask others to do what we would not do ourselves, and that our decision-making on Executive Council must always be done with consciousness and clarity.