Countdown to General Convention: Resolutions A049 & A050 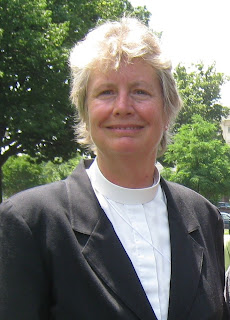 The Standing Commission on Liturgy and Music has done amazing work in this triennium They have collected and documented blessings for same-gender unions that have been used in different places around the country in the last forty years. From these, and from the wisdom of hundreds of Episcopalians they have constructed a moving rite of blessing for same-gender couples, in a process of consultation on an unprecedented scale. It is now offered to the Church for its acceptance and use.

The resolution calls for it to be a trial liturgy to be used only with the agreement of the diocesan bishop. If passed this means that it will be implemented in some places and not in others, creating an even greater geographical inequality than we currently experience. But sometimes change has to come incrementally.

Integrity is delighted that this resolution is on the table and is very hopeful that it will pass, providing us for the first time with a liturgy for gay and lesbian couples, agreed by the wider Episcopal Church. Since we express our faith in our worship (lex orandi, lex credendi) this is tantamount to saying that our relationships are now accepted and celebrated as leading to holiness of life. This is of significance to single LIGHT, not just couples, as it is a symbol that we truly are welcome in The Episcopal Church.

Alongside the resolution establishing this new rite comes a resolution calling for a study of marriage. This was first proposed by the Diocese of El Camino Real in 2009, in a resolution written and sponsored by the Integrity chapter. As society changes so do our major institutions, and marriage is no exception. This is a timely call to re-examine the foundation of Christian marriage and to restate it in a way which will give us a clear basis on which to offer twenty-first century couples a model for holy living in the committed relationship of marriage.


Resolved, the House of _______ concurring, That the 77th General Convention commend “Liturgical Resources I: I Will Bless You and You Will Be a Blessing” for study and use in congregations and dioceses of The Episcopal Church; and be it further


Resolved, That the 77th General Convention authorize for trial use “The Witnessing and Blessing of a Lifelong Covenant” from “Liturgical Resources I: I Will Bless You and You Will Be a Blessing” beginning the First Sunday of Advent 2012, under the direction of a bishop exercising ecclesiastical authority; and be it further

Resolved, That bishops, particularly those in dioceses within civil jurisdictions where same-gender marriage, civil unions, or domestic partnerships are legal, may provide generous pastoral response to meet the needs of members of this Church, including adaptation of the liturgy and declaration of intention contained in “I Will Bless You and You Will Be a Blessing”; and be it further

Resolved, That the Standing Commission on Liturgy and Music develop an open process to review “I Will Bless You and You Will Be a Blessing,” inviting responses from provinces, dioceses, congregations, and individuals from throughout The Episcopal Church and from throughout the Anglican Communion, and report to the 78th General Convention.

In response to Resolution 2009-C056, the Standing Commission on Liturgy and Music developed liturgical and theological resources for blessing same-gender relationships. Throughout the triennium, the commission heard stories of the urgent pastoral need for these resources in congregations of The Episcopal Church. Because these are new resources for a pastoral situation not previously recognized in official liturgical books of The Episcopal Church, the commission recommends that they be used under the direction of a bishop exercising ecclesiastical authority, and that there be a process of review in order to refine the materials, so that they are in keeping with Anglican theological and liturgical tradition.

Resolution A050 Create Task Force on the Study of Marriage


Resolved, the House of _______ concurring, That the 77th General Convention direct the Presiding Bishop and President of the House of Deputies to appoint a task force of not more than twelve people, consisting of theologians, liturgists, pastors, and educators, to identify and explore biblical, theological, historical, liturgical, and canonical dimensions of marriage; and be it further

Resolved, That the task force consider issues raised by changing societal and cultural norms and legal structures, including legislation authorizing or forbidding marriage, civil unions, or domestic partnerships between two people of the same sex, in the U.S. and other countries where The Episcopal Church is located; and be it further

Resolved, That the General Convention request the Joint Standing Committee on Program, Budget and Finance to consider a budget allocation of $30,000 for the implementation of this resolution.


Because the Church’s understanding of marriage affects so many of its members, the Commission believes it is important to engage in a Churchwide conversation about our theology of marriage. The Dioceses of El Camino Real and North Carolina have both recently undertaken studies of marriage, with reports available from the Digital Archives.
Posted by Integrity USA at 9:00 AM