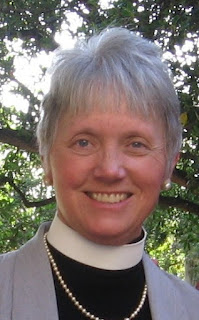 Commentary by the Reverend Canon Susan Russell
Diocese of Los Angeles
We end this week of blog posts on upcoming General Convention legislation with resolutions connected to two of Integrity's legislative goals in Indianapolis:

Both goals are included in the GC2012 Platform of The Consultation and a number of resolutions supporting them will be considered in Indianapolis. Those resolutions will include D018 -- urging Congress to repeal the Defense of Marriage Act (DOMA) and C105 -- calling for revising the canons to reflect the fact that civil marriage equality is the reality in a significant percentage of our dioceses.

The conversations around these issues of canonical and civil marriage equality are, I believe, separate but equally important issues of concern for the Episcopal Church.

Regarding civil marriage, as a church we have been on record supporting equal protections for gay and lesbian couples since 1994 and opposed to federal or state constitutional amendments prohibiting same-sex marriage since 2006. The equal protection guaranteed all American citizens by the 14th Amendment is not equal protection unless it equally protects ALL Americans – and denying some legally married couples the 1138 federally protected rights provided to other legally married couples in states with marriage equality is simply unconscionable. It is time to stop evolving on civil marriage equality and institute it – and the Episcopal Church has the opportunity at this General Convention to stand on the right side of history on this important issue.

My argument for changing the canons of the church regarding marriage equality is the variation of lex orandi, lex credendi – as we pray, so we believe – which adds lex vivendi … so we live. Or in this case, so we legislate.

As a church we have been in a process of prayerful discernment on the blessing of same-sex relationships for more than a decade. During that time we have gone from acknowledging that such relationships exist to affirming that the blessing of those relationships falls within the bounds of our common life to giving bishops latitude for a generous pastoral response to calling for the collection and development of liturgical resources for blessings. It now is time to make the canonical changes that allow bishops in jurisdictions with civil marriage equality to end the de facto sacramental apartheid inherent in outdated canons that discriminate against same-sex couples.

Resolved, the House of ______ concurring, That the 77th General Convention urge members of the United States Congress to pass legislation that would repeal the Defense of Marriage Act and allow the U.S. federal government to provide benefits to couples in a same-sex marriage.

According to the United States Government Accountability Office (GAO), there are 1,138 statutory provisions in which marital status is a factor in determining benefits, rights, and privileges. These rights and responsibilities apply to only male-female couples because the 1996 Defense of Marriage Act (DOMA) defines marriage as only between a man and a woman. Currently there are seven states and jurisdictions representing thirteen dioceses where civil marriage is equally available to both opposite and same-sex couples. And a number of federal courts have ruled that DOMA is unconstitutional for failing to provide equal protection and unfairly disadvantaging legally married same-sex couples.

The Episcopal Church has a long history of supporting equal civil protections for same-sex couples, including opposing federal or state constitutional amendments prohibiting same-sex marriage (GC2006-A095). Urging Congress to end discrimination against same-sex marriages is not only in alignment with prior actions of General Convention, it is in alignment with our baptismal promise to strive for justice and to protect the dignity of every human being.

Resolved, the House of _______ concurring, That the 77th General Convention revise the Constitution and Canons of The Episcopal Church with regard to marriage, to reflect the fact that some jurisdictions provide by law, or will provide by law, civil marriage or civil unions for same-gender couples.

Since the state of Maryland, other states, and the District of Columbia have made civil marriage available to same sex couples and the 75th General Convention Resolution C056 called for generous pastoral oversight and liturgies to bless these unions, it is time for the Episcopal Church to revise its Constitution and Canons.
Posted by Integrity USA at 9:00 AM