The Anglican Covenant - Part 2: What's in it?

This is the second installment of Integrity's four part series on the Anglican Covenant, written by the Rev. Dr. Caroline Hall. 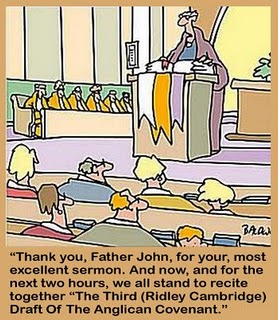 What makes Episcopalians “Anglicans”? What makes someone in the Church of Uganda “Anglican”? Anglican is a nebulous term and it’s difficult to define exactly what we mean. You can come up with a historical definition – those churches that grew out of the Church of England - but there are always exceptions, like the Anglican Church of Mexico which chose to become Anglican. You can argue that we all use the same prayer book, except that we don’t. The 1789 Episcopal Book of Common Prayer was modeled on the English 1662 Book of Common Prayer, but it wasn’t the same, and the differences have increased since the liturgical renewal movement of the 1970s. Unlike other Protestants, Anglicans don’t have a separate “confession” of faith which defines what we believe – in keeping with the Orthodox and Roman Catholic Church, we retain the ancient creeds.

The Anglican Covenant is partly an attempt to specify what makes Anglicans Anglican. This wasn’t an issue until the 1970s with the ordination of women and then the resurgence of evangelical thought within the English and Episcopal churches which coincided and conflicted with the greater inclusion of LBGT people. The loose consensus of what it means to be Anglican fell away gradually, accelerated by the orchestrated response to the consecration of Bishop Gene Robinson and then the election of Bishop Katharine.

According to the introduction to the Covenant, “we covenant together as churches of this Anglican Communion to be faithful to God’s promises through the historic faith we confess, our common worship, our participation in God’s mission, and the way we live together. “

Section One describes our inheritance of faith in the format of the so-called Chicago- Lambeth Quadrilateral which was originally adopted by our own HOB in 1886 as the basis for ecumenical talks. It has four parts:

1. The Holy Scriptures, as containing all things necessary to salvation;

2. The Creeds (specifically, the Apostles' and Nicene Creeds), as the sufficient statement of Christian faith;

3. The Sacraments of Baptism and Holy Communion;

The proposed Anglican Covenant adds two more points: the shared pattern of liturgy, and participation in apostolic mission. Section One also focuses on continuity with catholic tradition and with the Scriptures in teaching, theology and moral reasoning.

Section Two commits covenanters to common mission, including the Anglican understanding of the five marks of mission which makes “mission” much more than evangelism.

Section Three deals with how the Anglican Communion works together. It affirms a Communion of Churches which co-operate “in communion with autonomy and accountability”. Bishops are important as are the four “Instruments of Communion” – the Archbishop of Canterbury, the Lambeth Conference, the Anglican Consultative Council and the Primates Meeting. The proposed Covenant does not change the current power (or lack of it) that the “Instruments” have, and does not define the relationship between the four, but does say that “Each Instrument may initiate and commend a process of discernment and a direction for the Communion and its Churches.” Presumably the Instruments will play well with each other, as the rest of this section commits covenanting churches to, and “in situations of conflict, to participate in mediated conversations”.

Section Four is the controversial one. How is the Covenant policed? The Standing Committee of the Anglican Communion (until recently the Joint Standing Committee of the ACC and the Primates) will act as monitor. If a church steps out of line and does something on which the churches of the communion are not “of a shared mind”, there may be “relational consequences”. Go and stand in the corner.

The Rev. Dr. Caroline Hall is priest-in-charge at St. Benedict's Episcopal Church in Los Osos, California. She is a former Integrity Board Member where her portfolio included international affairs and a frequent contributor to Walking With Integrity.
Posted by Integrity USA at 5:21 PM