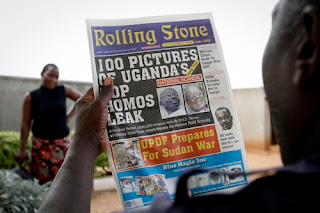 
Top Homos Leak” calling for “the hanging of homos” in Uganda in its issue of Vol.1, No.


and other Human Rights Activists, alongside their names and a description of their


professional jobs and private life, including where they live or work.


Lesbian, Gay, Bisexual and Transgender human rights activists have taken the tabloid to


Through this litigation the Lesbian, Gay, Bisexual and Transgender community is seeking


to bring to an end the violations. They will also educate and raise awareness that everyone


1. The MEDIA to immediately desist from using press freedom to incite violence


2. The Government of Uganda to intervene immediately and take all appropriate


3. The Government of Uganda should recognize and seize the opportunity to ensure


the protection of human rights, which is entrusted to its authority, and uphold the


Ugandan Constitution as well as the international and regional Human Rights


Instruments to which Uganda is a signatory.

Today an interim restraining order was issued.  Today activists spoke truth to power and the courts supported them. Pray that the order will stand the stand up long term. Pray human rights will prevail.
Posted by Integrity USA at 7:54 PM