Stories from the Pews: You Can’t Take Love Away From Me

There are many aspects to who I am. I am a partner, little brother, friend, student, musician, cradle Episcopalian and I identify as gay and transgender. Out of all of these things, being an active member of The Episcopal Church is closest to the core of who I am. Since elementary school I have become increasingly involved in my parish, my diocese, and the wider church. When I’ve had nowhere else to go, it has always been – and continues to be – my Church that I can turn to. It is this passion and love that led me to have the response I did to an email I received from the Rev. Susan Russell, past president of Integrity USA on February 9, 2011.

Russell's email went to the House of Bishops/Deputies listserve. The subject was “Teachable Moment on Holy Matrimony vs. Civil Marriage.” Since I was headed to the annual Marriage Equality Rhode Island (MERI) Rally at the Statehouse I thought what better time to read this email. The moment I began to read the email my stomach was in knots and I had a huge lump in my throat. These intense feelings were brought about by reading the words,  "As the Episcopal Bishop of the Diocese of Rhode Island, I firmly support the traditional definition of marriage as the union between one male and one female. I believe that Holy Matrimony is a sacred religious rite, whose definition should not be re-interpreted by legislation or civil courts." I paused, took a deep breath, and with great trepidation read the Bishop's entire statement in The Rhode Island Catholic and Russell’s response on her blog: An Inch At A Time. 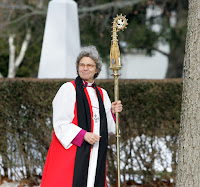 Within the hour I began getting phone calls, emails, and texts asking what I thought about the Bishop’s support for “traditional” marriage. It was not a surprise that Bishop Wolf is against same-sex marriage: she has made that clear both in personal conversation and in broader contexts. What was shocking and – in my opinion – slightly insulting was that she released these comments to The Rhode Island Catholic (a publication of the Roman Catholic Diocese of Providence). Nowhere on the Episcopal Diocesan website or blog was a copy of the statement. I have the utmost respect for Bishop Wolf and the office she holds. However, as Bishop, she should be honest with her own diocese before going to other denominations. I would have had much more respect for her actions if she first had posted these comments on our diocesan blog. I do not think that I am being irrational in asking for transparency and honesty from my Bishop.

As I stood in front of the Statehouse that afternoon waiting to get in, I looked down the hill and there right in front of me were the diocesan offices and Cathedral for the Episcopal Diocese of Rhode Island. As I waited to go into the Statehouse, to say that I am a citizen and taxpayer of Rhode Island and deserve all the rights and privileges thereof, I felt as if I was doing the same for my diocese. It was as if the Statehouse and the diocesan offices were a reminder that as current law and policy stands I am not equal, that despite my contributions to my community – both religious and secular – I am something less than, that I am not good enough simply by the virtue of who I am.

In the days following the rally, I continued to have conversations, emails, texts, and even facebook messages from laity and clergy of the Diocese of Rhode Island. It was – and is – these messages that reminded me why I am so committed to my ministry here in Rhode Island. Message after message of love and support came through. One priest even asked when the next rally was, because she was working on her sign that says, “I’m an Episcopal Priest and I Support Marriage Equality.”

Time and history have proven that the majority of people, both lay and ordained, in this diocese do not agree with the positions of Bishop Wolf on this matter. It is with this knowledge that I can carry on: That no matter what I can still go to my parish church day in and day out and be loved and supported for exactly who I am. There is nothing Bishop Wolf can say or do to take that love away from me.


Integrity USA is committed to Marriage Equality for all couples, within and outside the Episcopal Church.
Posted by Louise Brooks at 5:27 PM

Attaway! Well said. I hope you send Bishop Wolf a copy of this post.

Thank you Dante. I am a catechumen at St. Thomas Episcopal in Hollywood, CA, and, having been a Roman Catholic this the Bishop's statement shook me to my core. Your piece has helped me quite a bit. -- Chris Gable

It is ironic that the RI Roman Catholic Diocese has given Bishop Wolf a voice. Meanwhile they exclude women from any level of ordination, let alone the Episcopate. One would hope that this irony would not be lost on any female bishop or any woman in either denomination for that matter.

Inclusion is inclusion of all God's people.

Thanks for that point Neil. If Bishop Wolf felt differently about same-sex marriage, the RC Diocese wouldn't give her the time of day. And, frankly, they are probably rolling their eyes behind her back since many of them don't even believe she is part of a "legitimate" church, much less that her consecration as a bishop holds any water. She should be wary of the company she keeps.