Let All Who Are Thirsty Come

"Breathe" I told myself. It's the Episcopal Church's triennial General Convention, you'll be surrounded by other faithful people, and you've worked at high tech conferences and convention halls for 25 years. But this was different.

I was volunteering to be the social media dude at Integrity USA.

The first orientation gathering didn't calm me down. The eager staff and volunteers meeting was packed with clergy, seminarians and the discerning. Who was I to be the mouthpiece or at least the e-megaphone for this amazing group of God lovers? 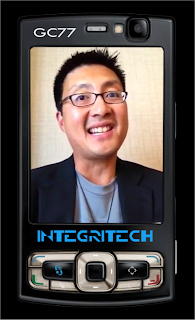 But after a couple of days, we settled down. I sat in committees, tweeted, posted, blogged, facebooked, photographed, webbed, texted, videotaped, video-blogged, sang, and prayed. I broke bread not just with Integrity but with a caring, larger community from a world-wide church. I learned much about the church in continental Europe as well as in our own backyards. I befriended Bishops, cried with transgender clergy, sang with ordinary canons and canons of the ordinary, and was told to go fishing by +Gene.

We all worked so hard, got tired, then worked harder. And we hunkered down, afraid of the 107F swamp air outside the convention center. I listened and sang to Taizé songs in my room, for I needed to center myself against the flurry, so as to better share Integrity's message with others.

And the message of God's inclusive love wasn't getting sent out there. It already WAS there. I can't express my surprise at the difference between GC 2009 in Anaheim versus Indianapolis. People WANTED to make all mean ALL. And with that, I was humbled by the Holy Spirit as she lifted us higher.

Even more so, I connected more strongly with social media in a way that I hadn't expected. I became a fan of twitter three years ago after the last General Convention. The fact that the General Convention was one of the TOP TRENDING search topics (#GC77) shortly after the passage of A049 on same gender blessings blew me away. We were acting because of God's prodding, and the world was watching, sharing, retweeting. It was humbling.

And on top of all that, I even got to enjoy a few minutes of Bonnie-Ball (tweet or facebook me if you haven't seen the final score).

At a local watering hole on my last night, a waiter expressed surprise that we were having cocktails AND we were at General Convention. Clearly, he didn't know  the Episcopal Church, on several levels. We shared our message with him, and he seemed impressed, pleased, and most curiously, curious. It's that curiosity that I found most powerful, because in the seeking lies the seeds of new awareness, new life, and new followers.

Thank you Integrity, #GC77, and all who build bridges for those who were lost or locked out. I pray that your work evangelizes and helps the discouraged and distraught find justice and equality.

Let all who are thirsty come, and let all who wish receive the water of life freely. Amen.