A “Neutral Gender Bathroom” is located on the way to the Integrity headquarters, aka the Nerve Center. Now my attorney-brain would prefer the sign said, “Gender Neutral Bathroom,” but aside from issues of syntax and semantics, I’m very pleased to see it. This request for such a restroom facility took place too close to the start of the 2009 GC to be able to be fulfilled.  For that reason, several months ago the GC office reached out to TransEpiscopal about making sure such a restroom was designated this year. This is especially important as Resolution D002 (inclusion of transpeople in the ordination discernment process) and D019 (inclusion of transpeople in lay leadership roles) have been passed as Acts of Convention (see IntegriTV Day 6 on YouTube.com for more info on the legislation process). That was a red letter day in the history of our beloved church. 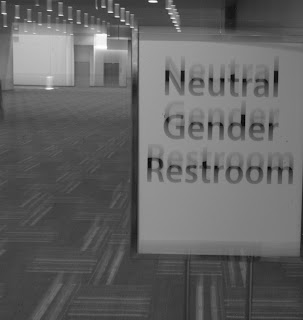 I had some fun photographing this sign. I wanted it to be abstract and strange to look at, because for many, the idea of a range of gender identities and expressions is completely new. I have been interested to see people’s reactions to the sign. Some double-takes are occurring. This is all a bit mysterious to a lot of people. In the House of Bishops, someone asked, “What is gender expression?” It seems that many are grappling with questions and trying to understand. That’s a good thing. As Bishop Gene Robinson preached at the Integrity Eucharist on Monday, the learning curve is great, and much has yet to be done to ensure the full inclusion of transgender people.

It feels unsettling because we are all placed in a box when we are born. I was put in a pink box, and my brother was put in a blue box. He fits his box quite well. He is a male, is masculine and heterosexual, and identifies as a man. I’m female and identify as a woman, but as a lesbian, and I have a more androgynous gender expression. I never wear skirts. I don’t carry a purse. I wear a man’s watch.

The four axes of gender, gender identity, sexual orientation, and gender expression are all in play for each of us whether we can articulate them formally or not. You can learn more about these concepts by watching a wonderful documentary about the experiences of transpeople in “Out of the Box.” Copies are available from Integrity USA, and it’s on YouTube.

The Gender Neutral Bathroom provides safe space for transpeople because, culturally, our restroom facilities demand a dichotomy of male and female gender/expression. Consequently, such a definition fails to recognize the varying gender identity components of who we are as people. Sexual orientation may or may not be a factor. For example, I have used the women’s restroom all of my life without an issue because I am recognized as a woman and presumed (maybe) to be heterosexual. I do not express “maleness” when in the restroom. In other words, I can “pass” as “normal” or heterosexual. Public restrooms can quickly become hostile places for transpeople if the strict and unstated rules of appearance and conduct are perceived to have been breached.

I have been using this Gender Neutral restroom whenever possible as a show of solidarity with my sisters and brothers in the transgendered community. It hasn’t been easy for me to live in this society as a lesbian, to be sure. But I think that transgender people have a much more difficult experience because gender roles and expression are intrinsically embedded in us from birth.

As a woman, I am constantly assessing the safety of a given location because of the possibility of rape or physical attack such as a mugging. I like the idea of designated safe space for attending to personal matters and applaud the General Convention planners for this vital first step in true inclusion of our transgender people.

Marcia Ledford has worked as a civil rights attorney for 25 years and is an Integrity Volunteer on the Communications Team at GC12. She is a seminarian studying for the Episcopal priesthood.
Posted by Integrity USA at 8:45 PM