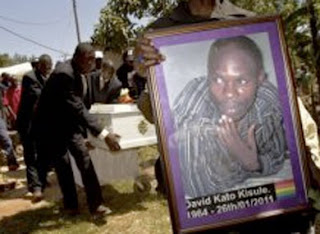 A scuffle broke out midway through David Kato’s funeral today when the Anglican priest Thomas Musoke burst out with an anti-gay rant. The had funeral drew about 300 people, including 100 LGBT friends and colleagues. No one was hurt in the fighting, but LGBT advocates report that they had recieved threats that that their cars would be stoned as they left the service.

Reuters desribed the scene this way:

The world has gone crazy,” the pastor told the congregation through a microphone. “People are turning away from the scriptures. They should turn back, they should abandon what they are doing. You cannot start admiring a fellow man.”

Gay activists, wearing T-shirts featuring Kato’s face with sleeves coloured with the gay pride flag, then stormed the pulpit and grabbed the microphone.


“It is ungodly,” the pastor shouted, before being blocked from sight.

After the scuffle was calmed, villagers refused to bury Kato’s coffin, so it was left to Kato’s friends, most of them gay, to carry him to his grave and bury him themselves.

Pepe Julian Onziema of Sexual Minorities Uganda was at the funeral, and was very upset at what she saw:

After we had read statements from everybody, including Obama, after all the nice things friends said about David, that this man could stand up and throw dirt at someone who should be resting in peace. It’s just disgusting.
Posted by Integrity USA at 2:25 PM

May God have mercy upon the souls of the Anglican Church in Uganda.