Today, Harry Knox, Interim Executive Director of Integrity USA, sent the letter below to every US Senator asking her or him to support the Every Child Deserves A Family Act (ECDF). We are sending out this Call To Action asking you to join Harry and do the same. 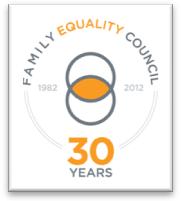 The Family Equality Council, a sponsor of ECDF, has seen immediate results by letter-writing campaigns such as this which educate lawmakers as to why this bill needs to pass.

Lend your voice to advocate for this important legislation. Copy this letter, sign your own name and send it to your two state senators today. Show that we can make a difference by taking action on this very important piece of legislation. To contact your US Senators, click here.

Dear Senator,
On behalf of Integrity USA, a non-profit organization working to proclaim God’s inclusive love in and through the Episcopal Church since 1975, I write to express our support for the Every Child Deserves a Family Act (S.1770). Many of Integrity’s members and supporters are lesbian, gay, bisexual and transgender (LGBT) parents, and children of those fine parents. We urge you to support and co-sponsor this important legislation, which would help ensure that every child can have a loving, stable home.

Of the 408,000 children in the U.S. foster care system, 107,000 of whom are waiting to be adopted, 27,000 children will leave the system without ever finding a home because of a lack of adoptive parents, according to the  Department of Health and Human Services. This represents a colossal system failure, since there are two million potential LGBT parents who would consider adopting from the public system if they were not obstructed by state policies, practices, and procedures.

While a few states have laws or policies prohibiting discrimination, most do not. Several states have
specifically excluded LGBT people from acting as foster parents or adopting. The law in many states remains silent on these issues, leaving children and potential parents open to decisions based on bias rather than the interests of children. LGBT people and their partners, whether in opposite-gender or same-gender relationships and whether married or unmarried, frequently face this kind of discrimination. The Every Child Deserves a Family Act would prohibit discrimination in public adoption and foster care placements on the basis of gender identity, sexual orientation, or marital status.

Scientists and child welfare experts have agreed for decades that children raised by LGBT parents fare just as well as others when it comes to healthy development and psychosocial adjustment. It is clear today that public agencies should focus on placing all children in permanent, loving homes, and not on the sexual orientation, gender identity, or marital status of parents.

For all those thousands of children who today are awaiting a forever home, I hope you will consider lending your support and becoming a co-sponsor of the Every Child Deserves a Family Act. Integrity stands ready to work with you to build a country where every child has a loving family and a place to call home.