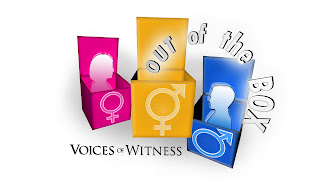 Integrity USA announces the completion of principal photography on “Out of the Box” – another groundbreaking documentary in the award winning Voices of Witness series. “‘Out of the Box’” puts the “T” in LGBT by celebrating the work and witness of the transgender community,” said Louise Brooks, Integrity’s Communication Director and the Executive Producer of the project.

“This documentary film is a resource for both teaching and transformation," said Brooks.  "It is Integrity's gift to the Episcopal Church and will be accompanied by a study guide designed to equip and inform opinion leaders and decision makers as we prepare for General Convention 2012.” The filming, which culminated this weekend in Stockton, California, in the Diocese of San Joaquin, at a historic ordination of a transgender woman to the diaconate, now heads into the editing process.
"The project builds on the collaboration between Integrity and TransEpiscopal that successfully introduced trans-inclusion legislation in Anaheim at the Episcopal Church’s General Convention 2009, " said Brooks.   "It was clear in Anaheim that to continue to advance non-discriminatory and inclusive resolutions much more education was needed to be done on the issues of gender identity and gender expression." 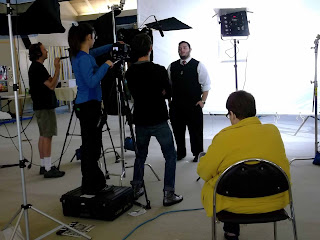 Brooks continued, “Gender identity and gender expression are issues that can easily be misunderstood and cannot be wrapped up in a neat little box.  So our goal with “Out of the Box” is to answer some of the most frequently asked questions. We have been blessed by a truly amazing cloud of witnesses who shared their stories and their lives with us. It has been a privilege to work with them to take this project from a dream to a reality. “Out of the Box” takes us one step closer toward Integrity's goal at General Convention this summer: 'Claiming the Promise: Making All Mean All!' ”

• In 2006 the initial “Voices of Witness” offered the inspirational stories of the lives of gay and lesbian Episcopalians, their friends and their families moving to the other side of “the inclusion wars”.
• In 2009 “Voices of Witness: Africa” gave voice to the voiceless LGBT baptized in Africa and gave hope to those who work to combat homophobia in our churches, our Communion and our world.
• And in 2012 Voices of Witness will continue to celebrate our diversity in “Voices of Witness: Out of the Box.” as it continues to present the case for "whoever you are and where ever you find yourself, you are welcome in the Episcopal Church". 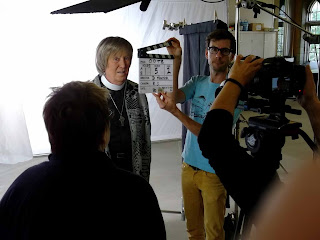 “Out of the Box” is currently scheduled for release in May 2012. Bishop Gene Robinson, in an interview for this film said, "I believe God is calling us into this conversation now. It's an opportunity to get to understand another part of God's never-ending diversity and another way to live into our baptismal calling to love all God's children."