Integrity USA thanks Bishop Mariann Budde for her support. 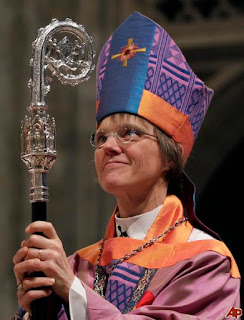 Will “allow and encourage” clergy to officiate at civil marriage ceremonies

WASHINGTON, D. C., MARCH 1—The Rt. Rev. Mariann Edgar Budde, Bishop of the Episcopal Diocese of Washington, released a statement today on the signing of the Civil Marriage Protection Act in the state of Maryland. Her diocese includes the Maryland counties of Montgomery, Prince George’s, Charles and Saint Mary’s. The statement follows:

“I congratulate the Maryland legislature and Governor Martin O'Malley for their courageous and persistent efforts to ensure marriage equity for all Maryland citizens. As soon as the Civil Marriage Protection Act is enacted and same-gender couples can be married in the eyes of the state, I will allow and encourage Episcopal clergy in the Diocese of Washington to preside at such ceremonies, asking that they bring to this ministry the same spiritual intention and pastoral care provided to heterosexual couples seeking marriage in the Church.
“Not all Episcopal clergy and congregations support same-gender marriage, and in no way do I intend to force this issue upon them. But for those who feel called to offer the sacramental and spiritual support of the Church to same-gender couples seeking marriage, I gladly give consent and the authority to do so.”
###