From Lesser Feasts and Fasts: Patrick was born into a Christian family somewhere on the northeast coast of Britain in about 390. When Patrick was about sixteen, he was captured by a band of Irish slave-raiders. He was carried off to Ireland and forced to serve as a shepherd. When he was about twenty-one, he escaped and returned to Britain, where he took holy orders both as a presbyter and bishop. A vision then called him to return to Ireland…

In my day school chaplain days, every time I told this story to the kids gathered for morning chapel I would pause at this point and ask them if they could imagine that … IMAGINE what kind of vision it must have been to convince Patrick to go BACK to the place – to the people – who had held him captive in order to bring them the good news of God in Christ Jesus. For of course we remember Patrick as the great evangelist whose missionary journeys spread Christianity all over Ireland – and today we celebrate his life and ministry AND the vision that sent him back to Ireland -- which is why we wear green to school today and eat corned beef and cabbage for dinner tonight. (And one of the mysteries of life I've yet to figure out is how corned beef got to be an icon for evangelism but there it is!)

In 2003 I was in New York City on my way out to meetings on Long Island along with a train full of revelers returning from the annual St. Patrick's Day parade. One of those revelers was a NYPD officer who had sprained his ankle marching in the parade and was heading home for an icepack and some Advil.

I must have been traveling in my collar because the conversation turned to church stuff and I found myself telling him about my ministry – at the time I was the Executive Director of Claiming the Blessing – and about the work we were doing in the Episcopal Church. He had been raised an Irish Catholic – and his partner was Puerto Rican – and it had never occurred to either of them that there might be a church where they would be welcome.

We talked some more and exchanged cards and I promised to email some folks to connect with and he said, sprained ankle notwithstanding, that he felt like running into me on the train was a St. Patrick's Day dose of the luck of the Irish. And when we came to his stop and he stood up to limp off the train, he took the big, green plastic shamrock from around his neck and gave it to me. And he told me to remember there were plenty of other people like him out there who needed to hear what we had to say about a church that welcomed everybody and that I should take some of his Irish luck with me for the work in front of me.

And I still have it. 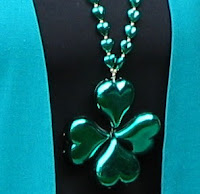 And it reminds me every time I see it of the New York cop who is part of the mission field out there longing for the good news we have to offer – yearning to know that the "Episcopal Church Welcomes You" signs really means him. And here we are in 2012 -- a church continuing to wrestle with whether or not it is going to fulfill its commitment to the "full and equal claim" promised the gay and lesbian baptized since 1976.


On this particular St. Patrick's Day I believe asking gay and lesbian Episcopalians to hang in there and continue to take the vision of a Body of Christ that fully includes all the baptized BACK to the church that still questions their vocations and relationships is like unto asking Patrick to go evangelize the Irish who enslaved him.

So let's remember on this St. Patrick's Day that the same God who inspired a former captive named Patrick to return to his captors and evangelize them in the 4th century is working in us as we work to call this church and this communion to wholeness in the 21st. And let's remember that it is that power working in us that can do infinitely more than we can ask for or imagine. And then let's get on with the work we have been given to do. (After we have a little corned beef and cabbage!)

Thank you, Susan, for a blessing of a message on a blessed day. It is a fact that those of us on the margins are called to keep showing up so that those in the center can be transformed into who they are truly called to be.