From the Bangor Daily News:

AUGUSTA, Maine — A bill concerning transgendered people’s right to choose which restroom they use generated heated debate at a public hearing Tuesday. Dozens of people gave impassioned, emotional testimony on LD 1046, which would allow the operator of a restroom or shower facility to decide who can use which gender’s restroom. Read the rest of the story here.
Integity Intern Ben Garren was one of those who testitifed today on behalf of Integrity Maine.
Here are his comments: 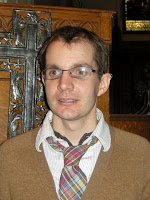 Good afternoon, Senator Hastings, Representative Nass, my name is Ben Garren, a resident of South Portland, and I am testifying in opposition to LD 1046 – An Act to Amend the Application of the Maine Human Rights Act Regarding Public Accommodation on behalf of Integrity Maine. Integrity Maine, part of an international orginization, is a faithful witness of God's inclusive love to the Episcopal Church and the lesbian, gay, bisexual, and transgender community.
As a christian of non-Jewish descent the treatment of transgender individuals, individuals for whom the gender binary of male and female does not readily function, is highly important to me. It is important because the first non-Jewish christian was amongst their number; this person is known as the Ethiopian Eunuch. The recounting of this baptism is encountered in the eighth chapter of the Book of Acts. This individual might have been made a Eunuch, by choice or not, or this individual might have been born neither clearly anatomically male nor anatomically female. Either way this was an individual who was genderless, who could specifically go into areas where only men were allowed to go but could also go into areas where only women were allowed to go. Until this Eunuch was baptized Christianity did not exist outside of a Jewish context.
My baptism was an essential moment in my life. For me it was the day I died to sin and became alive in Jesus Christ. The day when I was sealed for all time to Jesus in the name of the Father, Son, and Holy Ghost. My baptism came about because of the Baptism of the Ehthiopian Eunuch, because of an individual who today would fall into the definition of Transgendered and be affected by LD1046. So I look at this bill and ask what would this bill mean for the Ethiopian Eunuch? If this bill was made law how would Maine treat the first Christian baptized from a non-Jewish race?
And it saddens me to think that a group of legislators of my state would look at this individual, this holy individual chosen by God to be the example for all future gentile Christians, and say “we consider you second class”.
As I said in my introduction I am from Integrity Maine, the local chapter of an national group of Christians who feel called by our faith in Jesus Christ to advocate for the equality of all God’s children. I am here on their behalf as a matter of faith. I am here because the words “thy kingdom come, thy will be done” are not simply words upon my lips but actions of my heart. This is my passion that drives me to deliver to you a rather simple message.
I identify as a male. I dress as a male. I present to you as a male. My doctor and psychiatrist inform me that to live a full and healthy life I need to live that life as a male. This means that when I need to use the bathroom I use the one marked male.
I do not think this is a very complicated system. It is a system that has been on the books and working in Maine for five years with no problems. The amendment presented is not here to fix anything. It is here to take a simple working system and make it burdensome for the sake of prejudice.
The baptism of the Ethiopian Eunuch opened Christianity to the world outside of Judaism. In doing so it transgressed many sections of the Jewish Law Codes and called Christianity to recognize God’s love for all people beyond the binary of male and female. Thus as a Christian I cannot advocate for any Law Code that does not recognize this inherent equality.
To that end I stand, representing Integrity Maine, in opposition to prejudice, in opposition to any law code that does not recognize the equality of each individual, in full opposition to LD1046.
﻿
Posted by Louise Brooks at 8:54 PM