"Marriage Equality, Byron Rushing and The Fight For Fairness" 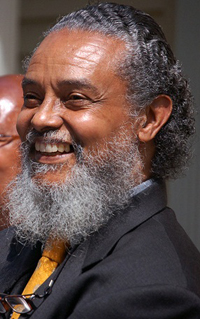 “Marriage Equality: Byron Rushing And The Fight For Fairness” is a documentary that connects the Black Civil Rights Movement with the Lesbian and Gay Marriage Equality movement. MARRIAGE EQUALITY, a project of award-winning filmmaker Thomas Allen Harris, was commissioned by Tribeca Film Institute’s ‘All Access’ Program in collaboration with the Nelson Mandela Foundation. The film will premiere as part of an international celebration of Nelson Mandela in the autumn of 2010.

The fifteen-minute documentary interweaves archival footage and photos with contemporary interviews to illuminate events surrounding the pivotal Massachusetts state constitutional convention on Same Sex Marriage which gave new momentum to the national same Gay Marriage movement as a Civil Rights issue. At the center of our story is Massachusetts Representative Byron Rushing, a veteran of the Civil Rights Movement who took the campaign for Same Sex Marriage into African American communities, directly challenging many religious leaders, and defining the right to Same Sex Marriage as a Civil Rights issue on par with the liberation movements of the 1950s and 1960s. An unlikely Gay Rights hero in some respects, Rushing, a heterosexual man of strong faith, has spent a lifetime championing the causes of the underserved, overlooked and oppressed.


In addition, MARRIAGE EQUALITY is partnering with a diversity of national and local organizations including the Human Rights Campaign to create a nationwide outreach campaign that will launch with the film’s premiere and include events and screenings in African American communities across North America including special events in Washington DC, Maryland, Massachusetts, California, and New York and will speak to both Gay communities and Black communities about this basic Civil Right.


To see and exceprt: http://www.youtube.com/watch?v=uTK2z8LCbw8&feature=player_embedded
Posted by Louise Brooks at 7:45 PM