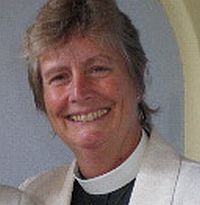 by the Reverend Dr. Caro Hall

I’ve been waiting for certainty, but I admit, I still don’t know. Should we sign on to the Anglican Covenant or not? Perhaps it’s no bad thing to be in a place of not-knowing, of beginner’s mind, rather than jumping in with a definite opinion at this stage. We, The Episcopal Church, will make our decision during our General Convention next year and the Holy Spirit may surprise us, as she has done many times before.

So I offer two thoughts; spaciousness and obedience.

This morning I have been privileged to sit on the terrace at St Mary’s Retreat House (run by the Order of the Holy Cross) in Santa Barbara, looking out over a valley filled with tall sycamores, eucalyptus and oaks to the blue-green mountains beyond, and I have been challenged by spaciousness - the tremendous spaciousness of God’s love and of the eternal now. That is, for me, the essence of Anglicanism – the spaciousness of mystery in thought and worship.

A few years ago the apocryphal quote, “I pray that none will be offended if I seek to make the Christian religion an inn where all are received joyously, rather than a cottage where some few friends of the family are to be received,“ went the rounds. It was attributed to 16th century theologian Richard Hooker, but if he said it, it was in private correspondence currently lost to the public eye. If he didn’t say it, he should have. It sums up the sense of possibility, of exploration, of spaciousness which is one of the qualities I love in our tradition.

At the same time I am pondering Christ’s passion as Holy Week is here and the necessity of offering some homiletic interpretation looms large on my personal horizon. “He was obedient even unto death…” Obedient. I don’t really understand (or perhaps I don’t want to understand) obedience; how the Trinity is constantly in joyful obedience and submission to one another, and how humanity is also called to participate in the Trinitarian dance of obedience and submission.

I experience it in a small way in my marriage. We just celebrated nineteen years together and people who don’t know us have started to ask if we’re sisters. (They say that dog owners start to look like their dogs - I’d rather look like Jill than like my dog who has a very long nose and exceedingly large ears!) Jill and I have come to look alike just as two trees grow entwined together, because we do live, most of the time, in mutual obedience and submission.

Perhaps the ideal for the Body of Christ is that we learn to live together like that. But it’s hard enough to work out what that might mean with my vestry, let alone trying to practice mutual submission with my sisters and brothers in Africa or Myanmar who I have never met and probably never will.
I think the Anglican Covenant tries to express a paradox – the sense that we are most free when we are bound in love. As a result it attempts to combine the spaciousness of Anglican identity with rules intended to respond to our failure to live up to the ideal of the mutual submission demonstrated in the Trinity. But we’re not God and we don’t know how to do it.

There are huge differences in culture, understanding and experience of God among the humans living in my little town of Los Osos, California, population about 14,000. The differences between Episcopalians across our several nations are even greater, and those between Episcopalians and other Anglicans, often huger still. However much we may want to live the ideal of mutual interdependence etc. I think we’re more like the Pacific rim of fire – enormous tectonic plates crashing against each other as we move and change and grow. It’s awesome rather than pretty. The Anglican Covenant is too small.

The brilliance of the great Anglican compromise of the sixteenth century was that our differences of theology and practice were subsumed in our joint worship. Perhaps this is where the true Anglican Covenant could happen –in a covenant to pray for one another. What if our Anglican Cycle of Prayer became not just a rote line in the middle of the Prayers of the People but a meaningful expression of who we are?

What if we could be Anglicans because we covenant to pray for one another? Nothing more, nothing less, than to be united in common prayer.
Posted by Integrity USA at 11:21 AM