The Diocese of Rochester in Albany for Marriage Equality

Two years ago Bishop of Rochester, Prince Singh, walked the halls of New York’s capital for Marriage Equality. He spoke to a rally and legislators. The results were a raised awareness that people of faith, leaders of faith communities, support the right of every New Yorker to marry the person they love and have their family recognized by the state. 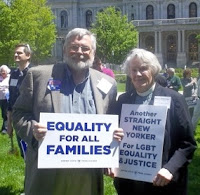 Two years ago Bishop of Rochester, Prince Singh, walked the halls of New York’s capital for Marriage Equality. He spoke to a rally and legislators. The results were a raised awareness that people of faith, leaders of faith communities, support the right of every New Yorker to marry the person they love and have their family recognized by the state.
That legislation was defeated, but we were not. 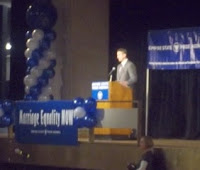 This year Governor Cuomo has established marriage equality is one of his top 3 priorities. After a request from Oasis Rochester, represented by Integriy’s Vice President for Local Affairs, Neil the Bishop sent a letter asking all clergy to prayerfully consider attending the annual Empire State Pride Agenda gathering in the state capital. In his letter he said,

“In March of 2009 I was proud to stand up for marriage equality. I spoke to an enthusiastic rally in Albany. There is a group that hungers to hear from people of faith who want to more than speak the message of inclusion. Our diocese has spoken and acted in favor of this movement through action of convention and I personally support the access of all New Yorkers to the rights and responsibilities of civil marriage.”

More than 10% of active clergy in our diocese donned clerics and made the trip to Albany to join clergy from many denominations across the state. Many lay members of the diocese were also there. They delivered the message. “This is what many people of faith believe. All are children of God, deserving of equal rights.“

The Rev. Canon Peter Peters arranged for a personal meeting with Senator Alesi outside the Senate Chambers with an important player, NY State Senator James Alesi. With the Governor expected to introduce the bill and an Assembly that has repeatedly voted to support this, the decision rests with the Senate. Peters said, when asked about committing to the daylong trip, “I believe that it is a matter of public justice that all people living in faithful covenanted relationships be treated equally.”


The Reverend Mary Ann Brody, spoke to her own sense of renewed commitment to action as a lesbian who recently went out of state to get married. “After 25 years [we ] were tired of waiting for NY.”

“The church has been a large contributor in demonizing homosexuals and opposing legislation to insure marriage equality. I wanted to be there with a collar on as a sign to LGBTQ people and my elected officials that there are Christian denominations, and leaders in those, who will stand with them and fight for the rights they seek.,” said Brody.

Senator Alesi is seen as pivotal vote and his district is a large part of our Diocese is in his district. During this meeting, Integrity’s past President, The Very Rev. Michael Hopkins was one of four members of the diocesan deputation to General Convention 2012. 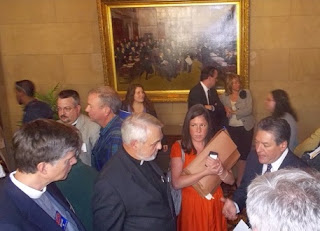 
Waiting for the Senator 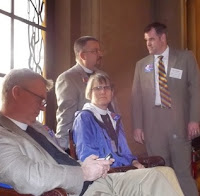 Alesi talked to us of his personal support for LGBT equality. He is a member of a formerly Roman Catholic church. The parish left the diocese when because of the inclusion of women at the altar “functioning in priest like roles” and his support of LGBT the pastor was excommunicated. When he left half of the huge parish followed him to form a church that more clearly reflected their vision of the Body of Christ.

When asked what we could do to help him in his decision, the senator said, “pray for me.”

In 2009, after a palpable pause Alesi voted against marriage equality with his head in his hands. Because his name begins with “A” his vote is the first in his party. After his vote the rest of the Republicans which we had hoped might support the bill, fell. Acknowledging his alphabetical exposure, Houghton said, “Senator, civil and human rights have only been advanced when people voted their conscience over their politics. We will be praying that you vote for what you know is right.”

Now, Integrity members across the United States can add their own prayers for Senator Alesi.

UPDATES: A new poll released today shows public opinion continues to trend toward marriage equality in New York State with a record high of 58 percent support and a record low of 36 percent opposition. The study comes from the non-partisan Siena Research Institute

Governor Cuomo is withholding introduction of the bill until he “has the votes.”