Integrity mourns the loss of a dear friend, supporter and advocate 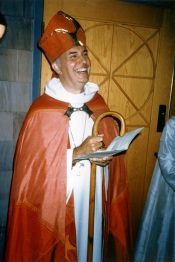 Bishop Anderson, age 77, was born in Staten Island, NY on December 18, 1933. He was the 7th Episcopal Bishop of Minnesota from 1978 to 1993. After serving as the Interim for the Church of the Holy Spirit in Lake Forest, IL he was called as Bishop Assistant to the Diocese of Los Angeles CA where he served from 1995 to 2008. Throughout his life he was a friend, counselor, teacher, and mentor to colleagues, and to parishes and dioceses he served. He graduated from Colgate University, and following military service in the Korean War, he graduated from Berkeley Divinity School at Yale. As a Danforth scholar he spent a year on the campus of Northwestern University, Evanston IL. His life as a priest began in MIddle Haddam, CT and later he became the Dean of St Mark’s Cathedral in Salt Lake City, UT.

For many years he served as a CREDO teacher. He received Honorary Doctorates from Seabury Western Seminary and Berkeley Divinity School at Yale. In combination with and the support of many in MN he founded the House of Prayer in Collegeville, MN. He was the 2nd recipient of the The Colman J. Barry Award for Distinguished Contributions to Religion and Society in 1996. Bishop Anderson was an honorary member of the Minneapolis Club.

Bishop Anderson was a long-time peace and justice advocate, a glorious story-teller and a staunch supporter for inlcusion in the Episcopal Church..

Posted by Louise Brooks at 3:55 PM