** Blogger has been down and offline for several hours and to fix their problems, they had to remove posts dating back to Wednesday. We felt it was important to repost this story.


The headline read...Progressive Christian groups are asking whether Obama spiritual adviser Jim Wallis should still be the face of their movement after his organization rejected an ad from a gay church group......... in the Newsweek/Daily Beast article on the Sojourners/BOL ad controversy

Here are some great quotes from our immediate Past President Susan Russell calling for Sojourners to revaluate their position......... 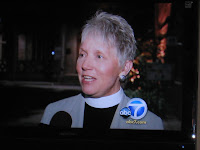 Rev. Canon Susan Russell, an Episcopal minister and activist in Pasadena, California, said she considers Wallis an ally in opposing war and reforming immigration policy but that she believes the issue is a crucial one for his organization. "More disappointing to me was the statement from Wallis, who has stepped up many times for civil rights of LGBT people," Russell said. "The issue in the ad was, 'Is there room for a family in church on Mother's Day?' If [Sojourners] doesn't have a position on that, they need to re-evaluate."

Our Executive Director Max Niedzwiecki on the call to action for Integrity members........

Max Niedzwiecki, executive director of Integrity USA, a group that promotes LGBT inclusion in the Episcopal church, said his organization would "keep holding Sojourners' feet to the fire."

Jim Naughton said people inviting Wallis to policy briefings and White House meetings should realize that he "is far to the right of the people he's allowed to speak for." And now, when liberal Christians "are making progress by the second," he added, is a particularly bad time to hedge on the church's welcome of gays and lesbians.

"I know there are people in Sojourners' organization and on its board who think it's time for them to be more brave," Russell said. "Maybe this is the moment for that."

Bravo to Max, Susan and Jim or being such elequent spokespersons on this issue. And, it's not too late for you to join Integrity in holding Sojourner's feet to the fire.

Email them at sojourners@sojo.net or their media person at media @sojo.net