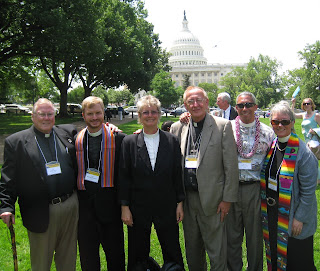 Yesterday Episcopal clergy including several Episcopalians and Integrity leaders lobbied on Capitol Hall for legislation including  the Employment Non-Discrimination Act ( ENDA), the Respect for Marriage Act (RMA) repealing DOMA, The Uniting American Families Act (UAFA),the Student Non-Discrimination Act and the repeal of DADT.  In advance of their visit Integrity USA sponsored a call to action notifying our congress people that these clergy speak for us.
The Rev. Winne Varghese spoke these words to a gathering outside the Capitol....................

Thirty-five years ago, in 1976, The Episcopal Church passed a resolution stating that gay men and lesbian women are “entitled to equal protection of the laws with all other citizens, and calls upon our society to see that such protection is provided in actuality.” Since that time Episcopalians have fought for equal treatment under the law for lesbian, gay, bisexual and transgender persons because it is the official position of The Episcopal Church. At times this has been in the face of intense opposition and little public awareness of the importance of the issues. 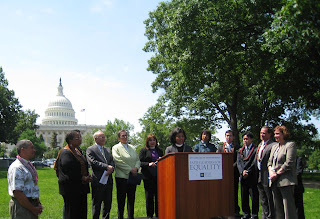 I am the Rev. Winnie Varghese, I serve an Episcopal Church in the Bowery in New York City. I stand here, not because I work in congregations filled with people affected by these laws. I stand here because I work in congregations filled with people from all walks off life who pledge at their baptism to respect the dignity of every human being as a part of our walk in faith with the risen Christ. We as Christians believe that love and justice conquer death, and we see that fulfilled in the person of Jesus, who calls us to follow him.

Today we are inspired by the all of the Lutherans, Presbyterians, Reform Jews, Conservative Jews and others who have no barriers to membership or leadership in their faith communities based on sexual orientation or gender identity. Many of us have been working for twenty, thirty, forty or more years.

The Episcopal Church by act of its General Convention beginning in 1976 has held us as Episcopalians responsible to work for the equal treatment under the law of gay and transgender people. Over the years we said clearly what that would mean including decrying acts of violence, calling for police support in creating and enforcing safe communities, civil marriage equality and fair treatment for transgender persons. 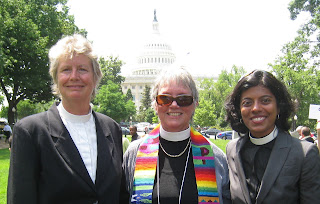 Despite 35 years of living our faith by challenging bias and violence against LGBT people, the daily news tells us that we have work to do. People still feel no shame when they bully and put down gay and transgender people. Why? Because the absence of comprehensive federal bullying and employment non-discrimination laws that protect LGBT people, gives tacit support for bias against persons because of their perceived gender identity or sexual orientation.

All parents and families want to believe it is safe for our children to go to school, but we know it is not. Our children are mocked and tortured in places that should be havens for their development as engaged and responsible citizens. When death overcomes the hope of their young lives, it is the responsibility of faith communities to stand up and say it is immoral. It is immoral to for our children to live with unchecked abuse from their peers, it is immoral when gay and transgender kids are cast out by their families, it is immoral when churches tell them God does not love them and it is immoral to have no federal laws against bullying or employment discrimination.

All of us here live and work for the day that everyone is safe to go to school and adults can go to work without fear of being fired for who we love. These basic building blocks of a fair society are based on respect and dignity for everyone. That respect and dignity rings true in the words of the Most Reverend Edmond Browning who testified before Congress in support of ENDA saying his support of ENDA “represents my deep, personal belief in the intrinsic dignity of all God's children." That was in 1994 and here we are—still testifying! Let’s be clear, we are not here just to chat with our legislators, we are here to tell Congress it is time to act.
Integrity USA thanks these Episcopal Clergy for their great work and wonderful witness.

Posted by Louise Brooks at 2:28 PM