Warren Throckmorton has his ear to the ground on the rapidly developing situation in Uganda, where Parliament may be set to pass the draconian Anti-Homosexuality Bill into law. He reported that the Human Rights Commission, Sexual Minorities Uganda and the Coalition on Human Rights all testified against the bill during hearings today. The Associated Press reports that pastor Martin Ssempa testified again this morning, calling for the death penalty to be removed and replaced with seven year’s imprisonment. This is a remarkable backtracking from supporting lifetime imprisonment previously. Ssempa went on to call for the bill’s passage “because homosexuality is killing our society.” 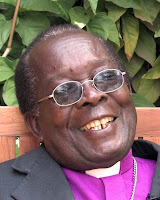 LGBT Advocate and retired Anglican Bishop Christopher Senyonjo also testified against the bill. He warned the committee that the bill would not make gay people suddenly disappear, but would instead turn Uganda into a police state. He also warned that the bill would result in an increase in the spread of HIV/AIDS because gay Ugandans would fear seeking treatment.

The AP also reported on the bill’s future:

Stephen Tashobya, the head of the parliament committee, said it is time legislators give the bill priority. He said a report on the bill would be ready by Tuesday and could be presented to parliament by the end of the week.

“Due to public demand the committee has decided to deal with bill,” Tashobya said. “The bill has generated a lot of interest from members of the public and members of parliament and that is why we spared some time deal with before this parliament ends.”

Parliament is due to end on May 11, although Parliament itself doesn’t constitutionally expire until the 18th. It’s not clear whether there is enough time for the bill to make it to the floor before the 11th, but Frank Mugisha of Sexual Minorities Uganda said that if Parliament does take up the bill, it will be almost certainly be passed. Warren Throckmorton, who is constantly updating this thread with new information as he finds it, comments on the bill’s prognosis:

Read the read of the story here.

About the hearings......
“The parliament wraps up its work this week and a newly elected parliament will convene soon after. The seven member committee will make recommendations following several days of public response to the bill. Supporters of the bill included Pastor Martin Ssempa and others who continue to claim homosexuality is imported from the best, is a threat to Ugandan children and needs to be legally stopped.”


The Bishop's testimony.......
The bishop spoke specifically to the effect criminalization of homosexuality has on access to information, prevention and care. “If we criminalize the LGBT community further, it will drive Ugandans further underground and compromise the relationship of medical, counselors and clergy that is sacrosanct and needs to remain confidential. How can we expect doctors to treat everyone when this bill will require them to report on their patients who are LGBT?”

Integrity USA will continue to follow this story and reort updates as we get them.
Posted by Louise Brooks at 9:00 PM