"Hang in there with us. We're going to get this right" 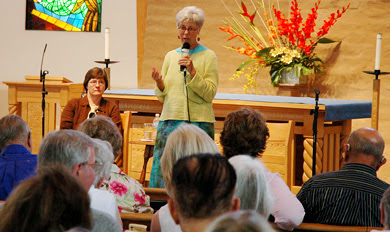 [ENS, ALBUQUERQUE, New Mexico] House of Deputies President Bonnie Anderson told more than 275 people gathered June 30 in the Episcopal Diocese of the Rio Grande to both be prepared and to stay calm amid the current tensions in the diocese, the Episcopal Church and the Anglican Communion.

"Keep your eyes on the prize, which is the reconciliation of the world through Jesus Christ, whom we love more than life itself," Anderson told the meeting at St. Michael and All Angels Episcopal Church. "And keep calm."

People from 21 of the diocese's 60 congregations attended the afternoon meeting sponsored by Episcopalians for the Future in the Diocese of the Rio Grande, which included presentations by Anderson and her chancellor, Sally Johnson, and a question-and-answer period. Those sessions were interspersed with hymns, prayers and a period of silent reflection.

One attendee, Dennis Prichard, the bishop's warden at St. Philip's Episcopal Church in Belen, New Mexico, said afterward that if Episcopalians heeded Anderson's reminder of Jesus' call for people to love one another "we would not be in the place we're in."

The Rev. Tom Woodward, a retired Episcopal priest who attends St. Bede's Episcopal Church in Santa Fe where he serves a treasurer, called the meeting a "rallying point" and a chance for people to share the "basic joy of being Episcopalians and not have to apologize for it."

Anderson drew applause when she promised that "the leadership of the Episcopal Church will never leave you alone, remember that."

Posted by SUSAN RUSSELL at 5:51 PM