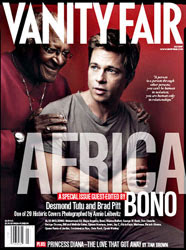 The July issue of Vanity Fair (starting on page 96) includes a conversation between Archbishop Desmond Tutu and Brad Pitt...

Brad Pitt: "So certainly discrimination has no place in Christianity. There's a big argument going on in America right now, on gay rights and equality."

Desmond Tutu: "For me, I couldn't ever keep quiet. I came from a situation where for a very long time people were discriminated against, made to suffer for something about which they could do nothing--their ethnicity. We were made to suffer because we were not white. Then, for a very long time in our church, we didn't ordain women, and we were penalizing a huge section of humanity for something about which they could do nothing--their gender. And I'm glad that now the church has changed all that. I'm glad that apartheid has ended. I could not for any part of me be able to keep quiet, because people were being penalized, ostracized, treated as if they were less than human, because of something they could do nothing to change--their sexual orientation. For me, I can't imagine the Lord that I worship, this Jesus Christ, actually concurring with the persecution of a minority that is already being persecuted. The Jesus who I worship is a Jesus who was forever on the side of those who were being clobbered, and he got into trouble precisely because of that. Our church, the Anglican Church, is experiencing a very, very serious crisis. It is all to do with human sexuality. I think God is weeping. He is weeping that we should be spending so much energy, time, resources on this subject at a time when the world is aching."

Brad Pitt: "I couldn't agree with you more. Thank you for saying that."

Photo by Annie Leibovitz
Posted by John Clinton Bradley at 8:01 AM