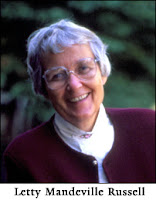 Letty Mandeville Russell, one of the world's foremost feminist theologians and longtime member of the Yale Divinity School faculty, died Thursday, July 12 at her home in Guilford, CT. She was 77. A leader for many years in the ecumenical movement, she remained active in ecumenical circles until her death, working for the World Council of Churches and the World YWCA.

In an introduction to a festschrift published in Russell's honor in 1999 under the title Liberating Eschatology, fellow Yale Divinity School theologians Margaret Farley and Serene Jones called Russell's influence on contemporary theology "monumental" and wrote of her "uncanny ability to articulate a vision of the church that is radical in its feminist-liberationist critique but that nonetheless remains anchored in the historic traditions and communities of the Christian church."

Farley, the Gilbert L. Stark Professor of Christian Ethics at Yale Divinity School until her retirement July 1 and a friend and colleague of Russell for three decades, said, "She leaves a legacy of wisdom, integrity, and indomitable hope. Voices will rise from women and men throughout the world to bear witness to her gifts to them, not the least of which is her gift of faithful friendship.

In the East Harlem Protestant Parish, Russell focused her ministry on equipping her congregation of mostly black and Hispanic people to claim their voices as leaders in the parish and the community. Her experiences in Harlem led her to develop Bible studies that encouraged people of color to explore ways in which the Bible gives them voice and liberation.

Letty Mandeville Russell was born in Westfield, NJ in 1929. She is survived by her partner, Shannon Clarkson; her sister, Elizabeth Collins of Salem, OR; seven nieces and nephews; 14 great nieces and nephews; and a great-great niece. In addition, Russell felt that her wider family included generations of feminist and womanist activists and scholars around the world.